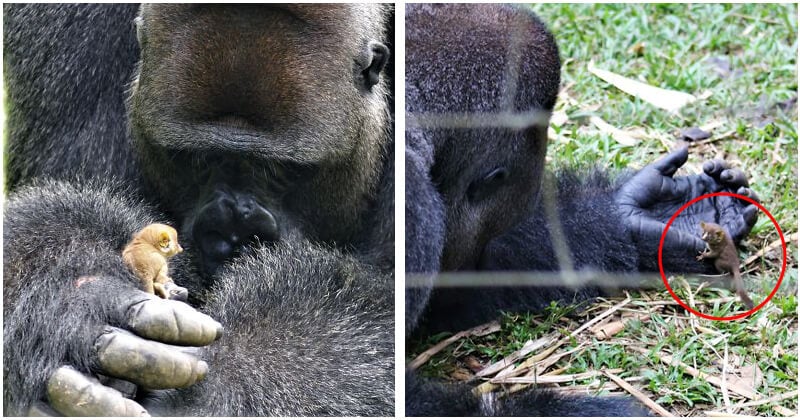 From a horse and a dog to a cat and a rhino, we have heard plenty of touching stories about interspecies friendships, but they never cease to amaze us somehow. This giant gorilla and his tiny buddy right here are no exception. The fact that they belong to two different species is already impressive enough, but it’s their size difference that makes their bond truly extraordinary. Bobo the 24-year-old Western Lowland Gorilla was rescued by Ape Action Africa when he was just a newborn, and now this tough guy has made it to the top position in his group. Bobo is currently leading three females and two other males, which means he’s absolutely not easygoing at all. However, deep down, the primate still has a soft side that he doesn’t always open up to others. This little bush baby was one of a few lucky creatures who had the chance to witness the sweet part of Bobo. He came across the gentle giant one morning at the sanctuary, and the two seemed to be really fond of each other. According to Ape Action Africa spokeswoman Elissa O’Sullivan, their direct caregiver was wowed by what he saw. “On his morning checks, our gorilla caregiver discovered Bobo cradling a young, wild bush baby,” O’Sullivan recalled. “The bush baby showed no fear of Bobo, moving around his body and spending time hopping around in an open grassy area, before choosing to return to Bobo.” O’Sullivan also claimed that it’s definitely not easy to stumble upon a bush baby (also known as galato) in the daytime since this tiny critter is mostly nocturnal. In other words, their encounter was truly exceptional.

“Bush babies are usually nocturnal, so it is very rare to see one during the day. We have never witnessed a wild primate interacting with a rescued one at Mefou Sanctuary,” she said. Actually, Bobo wasn’t the only one who was happy about the appearance of his little buddy. The other apes in his group wanted to befriend him as well, but Bobo simply rejected them all.

“Bobo’s group-mates were curious about the bush baby and hoped that he might share it with them, but Bobo kept the bush baby to himself,” O’Sullivan continued. The two were hanging out with each other for about two hours straight before Bobo let his friend go. Maybe they would see each other again soon in the future!

You can watch them in the short clip right here:

Aren’t they adorable? Please share their heartwarming story with your loved ones!

10 Animals Songs For Your Kids To Have Fun While Learning

Cat Adopts Baby Chick And Nurses Him As Her Own Kitten