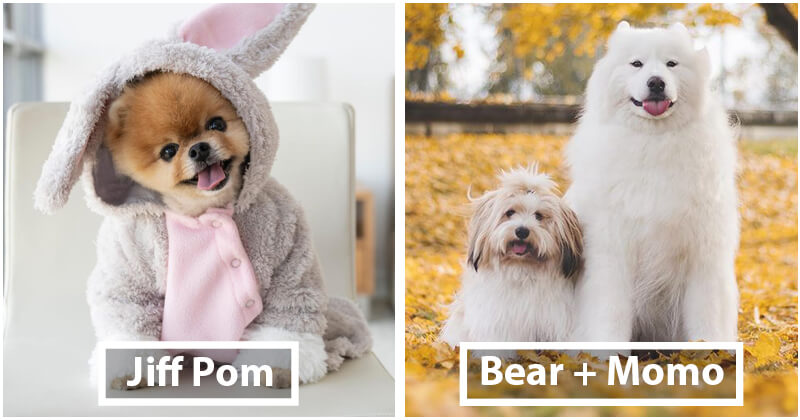 Dogs are called men’s best friends for a reason, and if you are a dog lover, you absolutely understand why. No one can warm our hearts as these friendly pooches do. Not only they are cute and sweet, but they also love us unconditionally. And you know what? Besides owning a dog, watching dog videos/pictures or hearing about them is also a great way to boost your mood and brighten up your day!

In this post, we are pleased to introduce to you the most famous good boys on Instagram right now whose charming appearances and loving personalities could win your heart within a few seconds. And of course, they’re super photogenic as well! Just scroll down and check them out: This Instagram account first belonged to a Corgi named Loki – a “happy-go-lucky guy with a feisty attitude”, as his family described. However, Loki passed away a few years ago and now it’s his friends Momo and Bear who took over the fame. The page sometimes features a few lovely foster doggos as well.

Manny was named after the famous professional boxer Manny Pacquiao. As the world’s most-followed Bulldog, Manny has been featured in Buzzfeed, “The Steve Harvey Show”, and more. Maddie is the star of her mommy Theron Humphrey’s Instagram – This Wild Idea. Her fascinating adventures are something that many people couldn’t help but admire. From a rescued dog to an Instagram celeb, this little Shih Tzu has gone a long way. The poor girl crossed the Rainbow Bridge last year, but her story continues to move us. Harlow and Sage follows amazing rescue stories of the two dogs and their pawrents – Brittni Vega and her husband Jeff. Even though Sage passed away in 2013, Harlow and his four-legged friends are still there to bring joy to dog lovers as well as emotionally support animal rescuers all over the world. Loki the wolfdog and his dad Kelly Lund met in 2012, and since then, their incredible journeys in the wild have inspired millions of people in the world. Found on a roadside near San Diego, Tuna couldn’t get over the pain of being abandoned and his emotional trauma had led to a weird habit of crawling on his belly. But thankfully, it was all over and he’s much loved now. Maruto, or Maru for short, is a delightful Shiba Inu with the brightest smile out there! He’s also insanely photogenic hand has been featured on a variety of famous magazines and commercials both within Japan and overseas. This funny boy is obviously the most famous pug right now with almost 4 million followers on Instagram! Doug starred in Fall Out Boy’s music video “Irresistible” in 2015, and he even had his own New York Times best-selling book titled “Doug the Pug: The King of Pop Culture” published one year afterward. Just like Doug, Jiff Pom is also a pop star. The endearing Pomeranian appeared in Katy Perry’s superhit “Dark Horse” in 2014 and he is also holding a world record for the fastest dog to run on two paws. Such a talented floof!

If you adore these sweeties as we do, don’t forget to share this post with your loved ones!

Baby Koala Has Cute Photoshoot For Her 1st Birthday, And Her Photos Melt Everyone’s Heart

Girlfriend Got Sulky With Her Partner For Over-Mourning His Put Down Cat, And Reddit Is Completely Divided