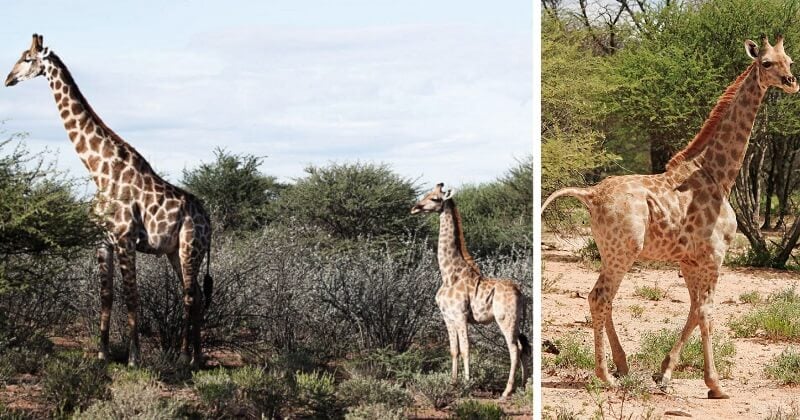 Giraffes are known for being tall and big creatures. An adult giraffe ranges between 16 and 20 feet in height. With this height, they are the tallest mammals on Earth. Therefore, when researchers from the Giraffe Conservation Foundation (GCF) discovered two wild dwarf giraffes standing at just 9 Ft in Namibia and Uganda, they were surprised. Turns out, dwarfism can also hit giraffes. The researchers announced the discovery in an article published in BMC Research Notes. In the article, they described two giraffes from separate populations and showed the effects of dwarfism on free-ranging wild animals. When the photos of the giraffes were shared online, many people couldn’t believe in their eyes and assumed they had been photoshopped. “I didn’t believe it at first,” said David O’Connor, president of Save Giraffes Now and member of the IUCN Giraffe and Okapi Specialist Group. “I thought it was photoshopped, to be honest.” The dwarf giraffes were documented on a field trip of GCF. The researchers took some pictures and used digital photogrammetry techniques to measure the limb dimensions of them. A regular giraffe measures at 16-20 feet high, but these ones are 8.5 and 9.3 feet high. Although these giraffes have shorter legs than other ones in the populations, their necks are the same length. “When we first saw these giraffe, the initial reaction was a bit of curious disbelief,” elaborated Dr. Brown. “These unique giraffe strike a remarkable contrast to other giraffes in the herd. During these surveys in Uganda, we work closely with Uganda Wildlife Authority rangers and I remember when we came across the dwarf giraffe, the ranger and I looked at each other to confirm that we both were seeing the same thing,” the lead author of the paper, Dr. Michael Brown explained. One was named Gimli, after the Lord of the Rings character, while the other one is Nigel.

“To be honest, the giraffe aren’t really ours to name, but sometimes researchers give them nicknames to identify them as individuals and to better communicate them to other researchers. Gimli was indeed named in honor of the character from Tolkien’s Lord of the Rings trilogy (as an interesting aside, when researching dwarfism in other wild animals, we learned that a dwarf elephant documented in Sri Lanka was also given the name Gimli… an interesting case of convergent naming). Nigel is just a lovely name given by one of the local folks in Namibia…I admittedly do not know the root of his name,” he added.

The cause of this dwarfism and its impact on the dwarf giraffe’s survival rates remain a mystery. However, Dr. Brown explained that dwarfism can give rise to health problems.

“Long legs are normally rather important for giraffe since running and kicking are two of their most effective anti-predator tactics. Additionally, it doesn’t take too much imagination to speculate that—since these giraffe are both male—there might be some physical challenges to mating. In watching these giraffe move, their gaits were certainly different from other giraffe in the population…although it’s worth noting that they both survived past being a calf which is a critical life stage when giraffe are typically most vulnerable to predation.”

Named After Its Sweet Sound, The Diederik Cuckoo Is A Precious Emerald That Shines Gorgeously