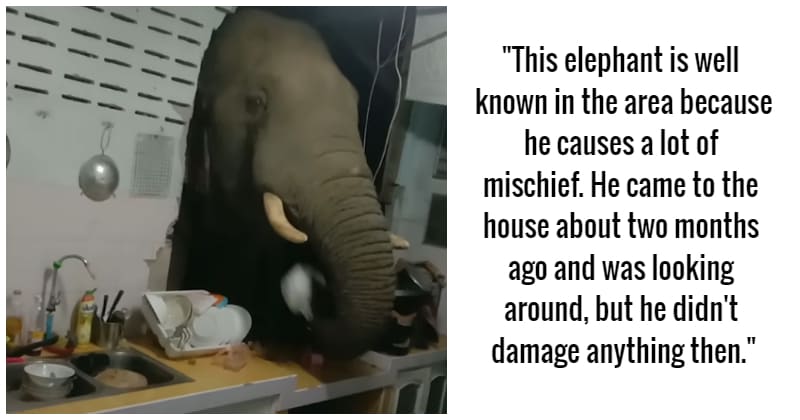 In early June this year, a hungry elephant was found smashing his head through a kitchen of a house and waking up the family members at midnight in Southern Thailand.

The male was Plai Bunchuay, who seemed to be looking for some food to fill his empty stomach. He rummaged his trunk through the kitchen drawers, knocking pans and sending everything around to the floor. The hunger made him even chew on a plastic bag of rice while making much noise. Awoken by the banging, Rachadawan Phungprasopporn and her husband were shocked to witness that scene. They knew the beast and didn’t want to hurt him. “This elephant is well known in the area because he causes a lot of mischief. He came to the house about two months ago and was looking around, but he didn’t damage anything then.” shared Rachadawan.

The episode of elephant Bunchuay breaking into the house was filmed and shared on Youtube. Watch it now:

After getting calm, Rachadawan’s husband helped her to hoo away the huge animal and called the officers for help.

“We spoke to the local wildlife officers and they told us not to keep food out in the kitchen because the smell attracts the elephants, so we followed their advice.” Bonchuay lives in Thailand’s Kaeng Krachan National Park. This is not the first time he visits Chalermkiatpattana village. Telling why elephants are having more frequent contact with humans, the park believes animals have changed their behavior in response to the food available from humans.

“The most likely explanation for this situation is that the elephant smelled the food and wanted to eat it. It’s not because the elephant was particularly hungry, as the food in the jungle has stayed the same. There is plenty and that hasn’t changed.” said Supanya Chengsutha, a conservation officer.

“But sometimes individual elephants experience a change in their behavior and character, so there’s no one factor why they would do this. Elephant eating habits have also changed now that they come into contact with humans more. They have started to like the food that people eat,” he added.