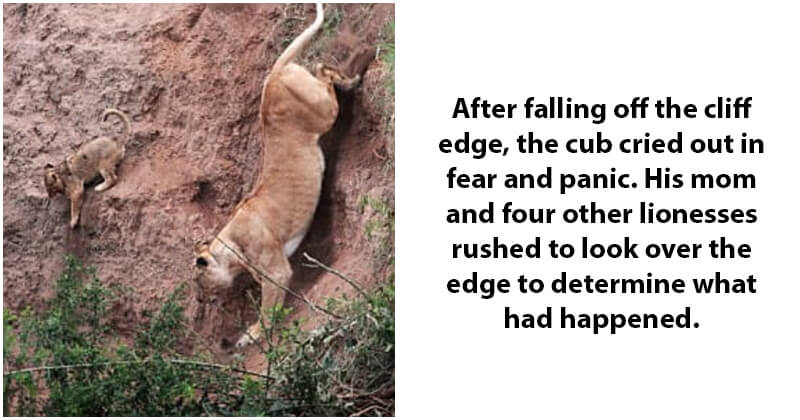 Recently, a wildlife photographer named Jean-Francois Largot, witnessed a dramatic rescue of a lion baby by his mother in Kenya’s Masai Mara game preserve in Africa. When the mom took her eyes off him, the lion cub had fallen over the edge of a cliff. But thankfully, he was trapped and did not fall straight to the bottom of the cliff. After falling off the cliff edge, the cub cried out in fear and panic. His mom and four other lionesses rushed to look over the edge to determine what had happened. The group of lionesses attempted to help but soon realized that it was too steep and dangerous to climb down to the cub. However, motherly instinct kicks in and his mother took quick action to save her little cub. As you can see in the video, the mother carefully crawls down the cliff and makes her way to her scared son. She uses her powerful claws to grip the crumbling side of the cliff as she inches her way down. Right as her exhausted baby seems to be about to fall, she reaches him, grabs him up in her powerful jaws, and climbs back to the top. When the mother lion reaches the top with her baby safely in her grip, she gently puts him down and licks his forehead to let him know everything is fine. Let’s hope the little one learned his lesson! A mother’s bond is stronger than anything. Finally, everything is good thanks to the power of motherly love that drove the female lion to risk her life in the attempt of saving her baby.

What animals do every day to make sure that their young are safe is astonishing and this is just one of the best examples to prove that.

Please share this wonderful story with your friends and family and don’t forget to let us know your thoughts in the comments.