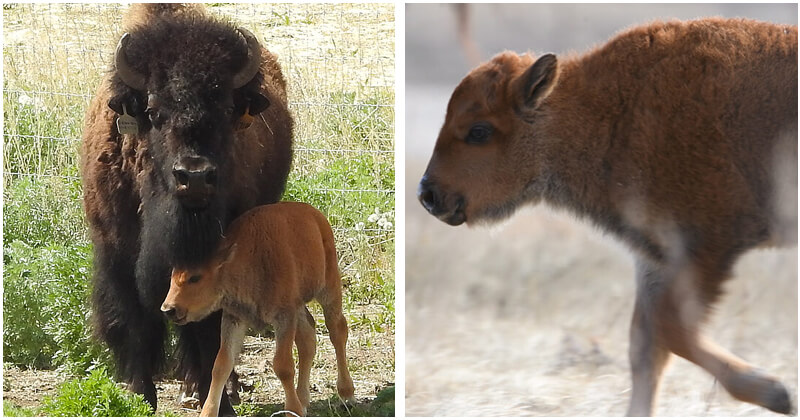 Ready for another good news in this difficult time? Well, we have something excited to share with you today! After over 150 years of waiting, our planet finally welcomes a new baby bison born on their ancestral land Wanuskewin, Saskatoon, Canada.

Talking about their adorable addition, Wanuskewin Heritage Park shared that the baby calf is a girl and she came to this world right on Earth Day –a special day to celebrate such a special moment. The staff also revealed this little baby girl belongs to a herd of 11 Plains bison that arrived at the park at the end of 2019. “Wanuskewin is delighted to announce the birth of a baby bison, who arrived on Earth Day. The female bison is the firstborn of the herd that Wanuskewin welcomed from the United States in December 2019, with genetic links to the famous Yellowstone herd. This marks the first bison born on their ancestral land at Wanuskewin since before the signing of Treaty Six in 1876 and the subsequent extirpation of the species,” they wrote on a press release.

Wanuskewin CEO Darlene Brander also expressed her joy upon hearing the great news. According to Brander, this is a wonderful reminder that no matter how harsh the current situation is, nature continues to move forward and this baby bison is a meaningful gift that it has given us all. “Every Earth Day, we honor our connection to the land and the many gifts of Mother Earth. This year, we are blessed by the arrival of the first baby bison,” she said.

According to Felix Thomas, Wanuskewin Board Chair and co-Chair of the Thundering Ahead Capital Campaign, they are looking forward to watching over every step of this little being.

“Welcoming back the bison to Wanuskewin was a central pillar of the recent capital fundraising campaign. Every birth is part of the circle of life and signals progress. We look forward to watching this baby thunder across the Plains before long.”

Let’s take a peek at this charming girl in the video right here below:

The bison is the large, even-toed ungulate in the genus Bison from the subfamily Bovinae. It’s reported that six species of bison were extinct and now there are only two surviving species in this world, including the American bison (which is composed of two subspecies: the Plains bison and the wood bison) and the European bison.

Update: Turns out it’s two instead of one! Some visitors had a really nice surprise while taking part in a Bison Tour at the park when they spotted another girl moving along with the herd, which is the 17th bison of Wanuskewin Heritage Park. Congratulations! Please share this amazing news with your loved ones!

Top 7 Most Familiar Animals 3 Letters In The World

Watch These Kittens Showed Up And Enjoy A Man Performing

Are Rats Friendly? Can We Keep Them As Pets?

30 Pictures That Prove Cat Is The Master Thief