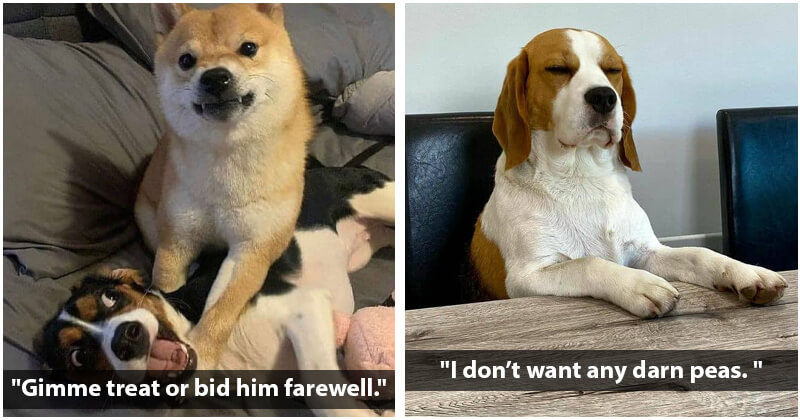 It’s no secret that cats are the drama queens of the house and no pet could ever top them when it comes to acting sassy and cheeky. Dogs, on the contrary, are often quite obedient. Most of the time they are smart, lively, and even goofy. But when they are sassy, they are sassy as fluff.

If you own one or a few dogs, you surely know how troublesome these furry guys could be. They may be judging, demanding, and even irritating sometimes, but we just can’t say mad at them. Who can say no or yell at these sweet, innocent faces anyway?

Wanna see the not-so-good part of our beloved good boys? Don’t worry, we’d got you covered. Here are 22 hilarious pictures of dogs with an attitude that will put a smile on your face, just scroll down and enjoy! #2. Started the day off Grumpy. #3. Ella is on a time out from going outside because keeps eating berries from the tree even though they make her sick (dog logic). She’s ignoring us now. #6. This is Chips. We believe that she’s a Brittany spaniel but never got quite sure of it. #8. “Keeping the sassiness going by not looking at the camera after I just pulled mom through the mud on the trail hehehehe…” #9. Are sassy Wednesdays a thing? #11. Someone is pissed off and not happy about having a grooming session.

#12. Someone is pissed off and not happy about having a grooming session. #14. William Shakespeare once said: “Although she be small she is fierce“. And he’s not wrong. #15. Loki is just completely fed up with my rubbish. Was watching who wants to be a millionaire and answering the questions and he’s like “mum, can you not?” #16. “What chu lookin’ at hooman? Just having me some quality PawPaw time. Move along.” #20. Missing the beach already and it’s only been a week! What do you think about these funny doggos? Share your thoughts with us in the comments below!

People Found Their Parents Were Cooler Than Them, And Shared These Photos For A New TikTok Challenge

25 Wholesome Photos That Will Brighten Up Your Day Instantly

[VIDEO] Man Is Seen Giving Stray Cats Some Food Before His Meal, Turns Out He Frequently Feeds Them

Bride Doesn’t Include Wedding Dinner Cost In Her Invitations, Freaks Out When Many Guests Canceling On Her After They Find Out

20 Internet Liars That No One Actually Believes In

15 Most Heart Melting Animals On The Farm Photos