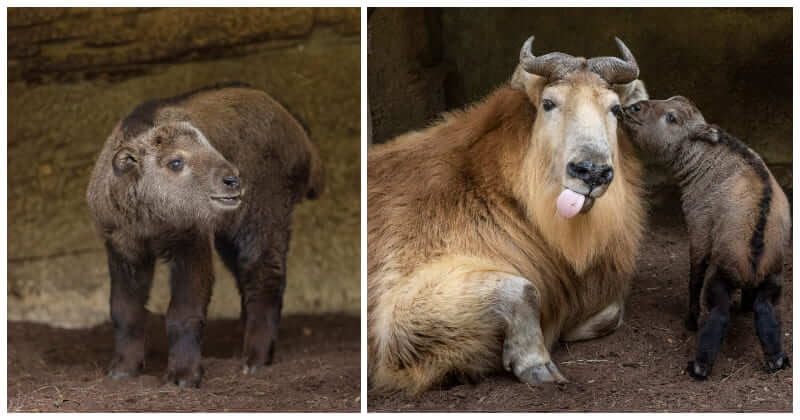 On 14th April, San Diego Zoo was thrilled to celebrate the birth of its newest member, baby golden takin Mei Ling, who learned to stand up on wobbly legs one hour after birth. The zoo said that her arrival marked a special event, as she is the first golden takin to be born in Western Hemisphere. Zookeepers were also excited to welcome her.

“This is a species most people have never heard of, let alone seen,” said Tammy Batson-caretaker at San Diego Zoo. “I have this theory: People don’t care about what they don’t know about. You can’t. If I can give you a reason to care, then you can make good decisions.”

The calf, packing on pounds, was given the name Mei Ling (in Mandarins, it means ‘beautiful antelope’). According to Wikipedia, golden takins are horned mammals closely related to sheep. They are very big sheep. Mei Ling’s father, Zhao, weighs 850 pounds, and her mother, Bona, scales up to 500 pounds. The species travels far and high in search of bamboo and vegetation. To adapt to their lifestyle, the animals grow thick long coats to keep them insulated to cold weather and a cavernous nose to warm the frigid air before it reaches their lungs. The species is native to the Himalayas, and they are considered vulnerable by the International Union for Conservation of Nature (IUCN). In China, they are called national treasures, apart from giant pandas. In Western Hemisphere, visitors can see golden takins nowhere but only in San Diego Zoo. As time passed by, the calf got more comfortable. Few days after birth, she was seen leaping from rock to rock and playing with her parents. The zookeeper said that her weight has already doubled since she was born. Two months later, she will become a six-month-old girl, and soon, she will reach her mother’s size.

It’s so happy to know Mei Ling is now in safety and love with her parents!

Meet Messi, The Adorable Puma Is Living As A Spoiled House Cat