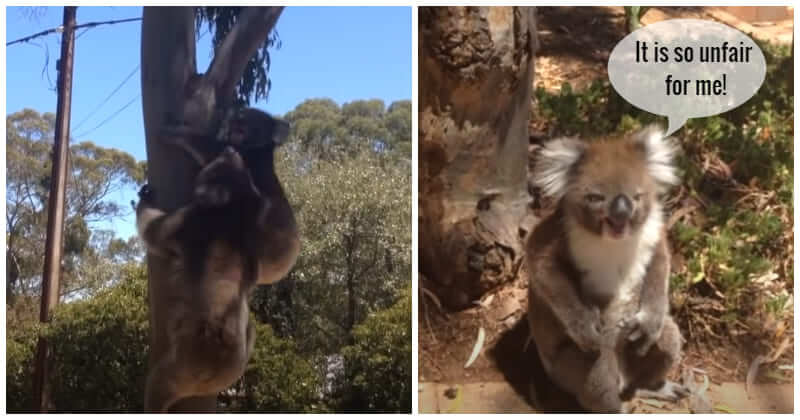 The fight between these koalas seems to be cuter than we can expect. Adorable Footage After koala being kicked out of tree.

Life can be tough sometimes. There are times that someone stronger takes the thing we want, and we can do nothing but … cry. Like us humans, animals do experience the same things, but the fight between these koalas seems to be cuter than we can expect.

Captured on camera by Alicia Alexander and posted on Facebook Fan Page, the hilarious footage of two young koalas kicking out each other from the tree has gone viral on the Internet and brought us a mix of feelings!

The video started when one of the koalas got kicked out by a rival who was stronger and bigger than him. Collapsing on the ground, he started crying because he knew it was unfair for him. That was a heart-melting scene, and people witnessing it could do nothing for the crying baby. He looked pathetic and helpless.

“You are a meanie”, she talked to the larger koala who was still on the tree and seemed to be happy with his triumph.

After a few minutes, the poor koala tried to go back on the tree, and the second fight happened. However, as he wasn’t ready enough, the baby lost again. That made a heartbreaking moment, but it was adorable as well! It is unknown why the two animals put up a fight because koalas are typically quiet and cute. They do make noise in the breeding season. Therefore, Alexander first thought it was the reason, but the animal’s sounds showed that might be the case. This ‘Long’ Dog Is Stealing Hearts Over The Internet, But His Snout Is Even Longer

Sweet Sick Street Cat Got Rescued And Fought For His Life

Neighbors Think Girl’s Dog Is Stray, Take It From Her Garden, But Become Ridiculous As She’s Angry At Them

Woman Expels Her Boyfriend After Hearing Him Speaking Ill Of Her Cat – Is It Worth It?