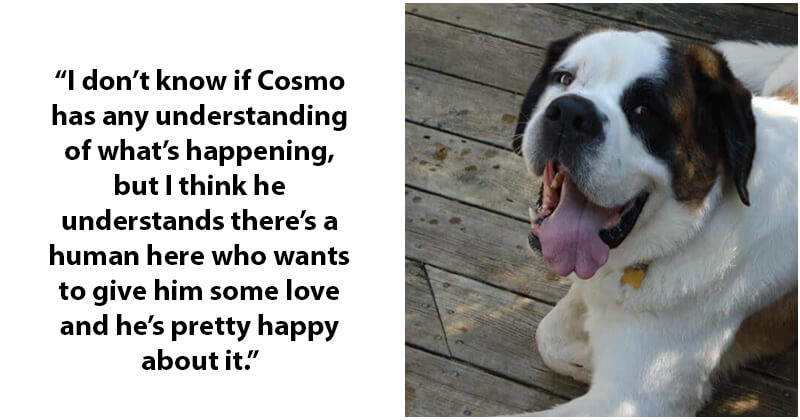 If you are a dog owner, you know that dogs are the most loyal and loving of friends. They deserve a forever home where they can be cared and loved. However, there are many dogs who don’t get the love they deserve. They don’t have a home, they don’t have parents and they have to fight to survive. All the things they need is a loving home but it seems difficult for them. And then all of a sudden the poor dogs get placed into a real house with people who absolutely love them. While it’d be an amazing feeling, it may be confusing at first and take a while for them to get used to. It’s also the case of Cosmo, a gentle giant and friendly dog who hasn’t had an easy life. He was owned by a dog breeder, so he never knew how it felt like to have a home. Cosmo is a 2.5-year-old, 130-pound Saint Bernard, he was born to a breeder in Nebraska. For unknown reasons, the breeder decided to give Cosmo up and he ended up in a shelter in Auburn, Nebraska. The dog was confused about why he was in the shelter, but despite that, he was still very friendly with the shelter staff. In order to find a home for Cosmo, the shelter shared his pictures on a pet adoption site, and a couple in upstate New York saw the lovable dog. They fell in love with the pup and decided to drive all the way to Nebraska to pick up the fur baby. On the way, his mom was nervous that she and Cosmo wouldn’t get along, but they bonded instantly! The next morning, Jayne and Cosmo came back to Upstate New York. Everyone at the shelter was sad to say goodbye to Cosmo, but they were happy he was going to a good home and his little dream became true. Finally, Cosmo and Jayne arrived at Jayne’s house. Jayne introduced Cosmo to her two other dogs, Poppy and Grendel and her kids, Alice and Owen. “I don’t know if Cosmo has any understanding of what’s happening, but I think he understands there’s a human here who wants to give him some love and he’s pretty happy about it,” Jayne said. Then, Cosmo took his first steps into his new house and his reaction is priceless. “It’s nice to see him on a big space, see him spread out and put his belly on a cool floor, and just know he’s finally staying in a space, a place where can feel happy and comfortable,” Jayne said. Check the clip below and prepare to fall in love with this adorable giant of a dog.

As the days and then weeks went by, Cosmo got more and more comfortable in his new home, and he is still learning how to simply be a pet dog. Please share this story and help spread the love. We wish Cosmo all the best with his new family!
h/t: Animal Channel

These Daily Moments Will Unlock Aries’ Personalities…Watch Them Now!