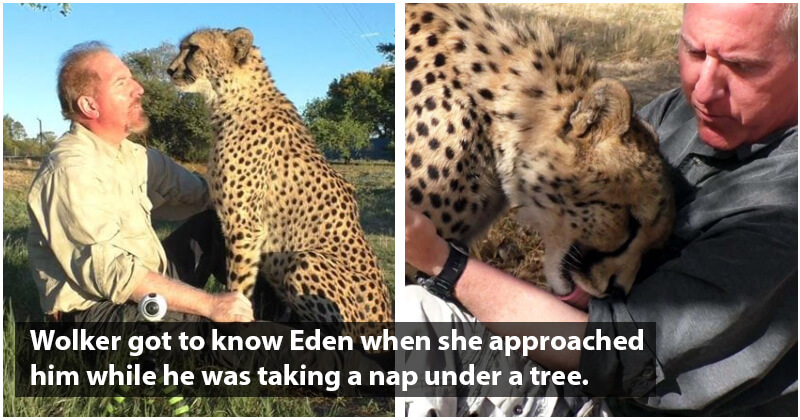 Sleeping with a cheetah? It sounds crazy, but some animal lovers are willing to do it, no matter how dangerous that may be. And Dolph C. Volker, a wildlife photographer from the U.S. is one of those people. His love for animals has blossomed when he held his dying dog in his arms, he was overwhelmed with feelings of deep sorrow. After his dog crossed the rainbow bridge, he decided to devote his life to the betterment of animals. For this reason, he started to use up his vacation days and savings to volunteer at the Cheetah Experience. This is a sanctuary dedicated to protecting and preserving the cheetah and other endangered and threatened species in South Africa. And it was there that he became obsessed with cheetahs. At first, Volker was a little afraid to be so close to the cheetahs, but now, they are the best of friends. He’s made a lot of friends at the sanctuary, including a cheetah named Eden. He has become so close to cheetahs that he now calls himself “The Cheetah Whisperer.” Wolker got to know Eden when she approached him while he was taking a nap under a tree. She walked up to him and looked at him as if he belongs to the same species as her. So, she decided to snuggle up with this harmless human. They cuddle together and Volker even lets Eden nibble, lick and groom him. And that was the beginning of their beautiful, amazing, and fascinating friendship. “I had no idea Cheetahs were so special. I’ve fallen in love with them. It’s an incredible species that truly deserve help, support, and protection,” Volker says. That’s why Volker loves to work with cheetahs, and his YouTube channel is filled with videos of Volker and his cheetah friends.

You can watch Wolker and Eden’s soothing bond of friendship in the video below.

It is adorable to watch this pair enjoy each other’s cozy company. Would you let a cheetah bite your ear? Please share to pass on this story to your friends and family.