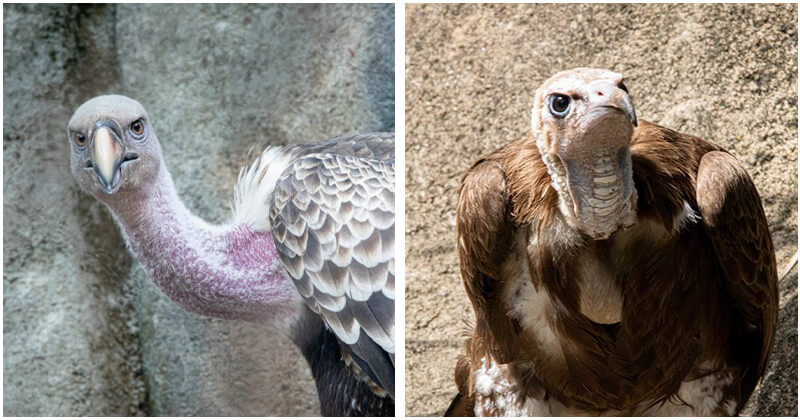 Another great news for animal lovers worldwide and especially bird admirers in America: Houston Zoo – a 55-acre zoological park located within Hermann Park in Houston, Texas has just welcome a committee (a term used to reference a group of vultures resting on the ground or in trees) of endangered vultures into their big family. Thanks to the care of the staff, these birds of prey have settled in quite well and are doing fabulously.

According to the zookeepers, this is indeed the very first time they have the honor to host such special guests. Just like the eagles and the hawks, these huge birds are all Old World Vultures. They look a lot like each other, but they do have some different characteristics based on their species. The hooded vulture is a small vulture with brown plumage and a grey to black “hood” that makes its name, it has lost 85% population over the last 50 years due to poisoning, hunting, habitat loss and degradation of habitat. There are also two cape vultures (a large vulture with creamy color and some dark feathers on its tails and wings) in the gang, including Nazgul, the three-year-old male coming from the Albuquerque Biological Park and Chiku, the one-year-old female coming from St. Augustine Alligator Farm Zoological Park. As the only girl of the committee, she surely knows her crucial position.

“She is friendly, but her strong personality makes her the boss of the committee,” they wrote on their website.

The last member and also the oldest of the committee is Bruce, a seven-year-old male Rüppell’s griffon vulture coming from Dallas Zoo. This species’ population is declining as well due to habitat loss, incidental poisoning and other factors. House Zoo hopes that these new guys would be much loved and have a great life at the zoo, where they could be protected and cared for.

“Vultures tend to be a misunderstood species that are often viewed as foul because their diets are associated with death. On the contrary, vultures help keep the eco-system clean and balanced. Their preference for fresh carrion, carcasses vultures eat, allows them to dispose of or consume meat that would otherwise become a breeding ground for disease as it decays,” Houston Zoo explained.

Do you love animals? Please share this exciting news with your loved ones!

25 Photogenic Supermodel Cats Who Know How To Strike A Pose

Little Girl and Her Dog Have A “Conversation” With Each Other