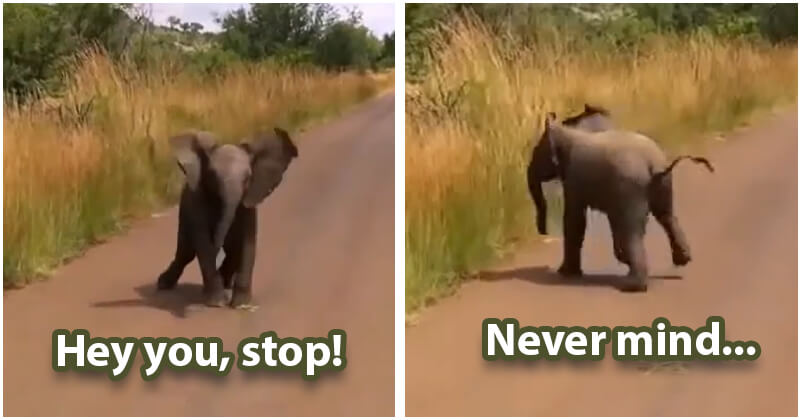 Remember the adorable baby elephant who had a great time playing with mud during a drought at Kruger National Park? Well, this 7,523-square-mile reserve is actually home to over 20,000 elephants, so it’s not surprising that tourists can always come across really delightful and sometimes even hilarious moments of those gentle giants. The brave little boy in the video right here is an outstanding example. By attempting to attack a safari truck to defend his territory, he has given the “intruders” a good laugh instead of terror.

In the short yet impressive footage captured by a tourist, the little calf clearly tries to act all grown up. Like a big boy, he rushes toward the truck within a few seconds, looking really determined.

But then, he suddenly changes his mind and retreats in the blink of an eye.

After hiding behind the tall grass for a while, the courageous creature moves forward to charge at the truck again, only to fail miserably just like his first effort.

Finally, after having a quick glance at the green “monster”, the cute tusker simply decides to give up and runs back to his mother nearby with his tail wagging rapidly.

He even hides under her in the hope of finding some comfort there. Seriously, could this baby elephant be any funnier?

Just take a peek at the amusing scene:

However, as sweet as the clip may seem, this endearing boy will be no joke after he grows a bit bigger.

“A charging elephant is actually no laughing matter. An enraged bull elephant can cause damage to vehicles and injuries to tourists – even death. If an elephant charges and its ears are pinned back, it means business. If it charges with ears fanned out, it indicates a mock charge,” 100100Channel captioned under their video.

If you adore this little guy as much as we do, please share this post with your loved ones!

These Cute Tiny Kittens Are Guaranteed To Brighten Up Our Day

Woman Asks If She’s Wrong Not To Buy An ESA For Daughter, And Redditors Are Dividing Themselves To Reply