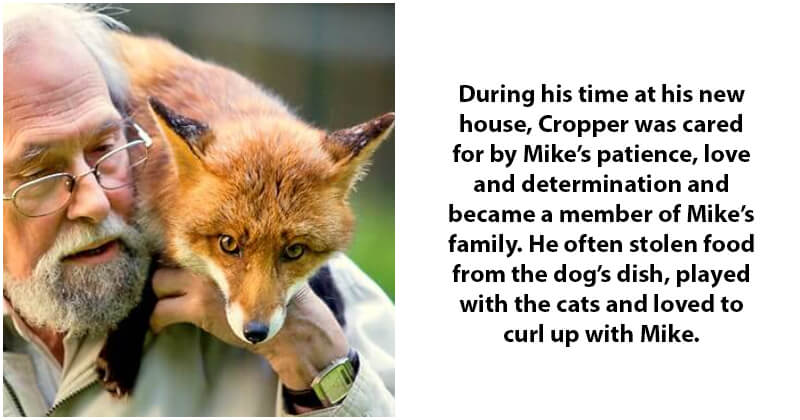 A red fox named Cropper was found on the side of a road and rescued by The Fox Project in Turnbridge Wells in England. Due to being badly injured and ill (toxoplasmosis), the rescue could not let him return to the wild. For this reason, they just had two choices: put down him or find him a home. However, it was very difficult to look for a home for a wild animal. Everything got stuck until Mike Trowler, a retired engineer appeared. Mike said that he was impressed by fox behavior and spent his time dealing with them. For this reason, Mike took Cropper home and nursed him back to health. In addition to taking care of injured foxes, he also helps orphaned fox cubs and fosters them until they can come back into the wild. During his time at his new house, Cropper was cared for by Mike’s patience, love and determination and became a member of Mike’s family. He often stolen food from the dog’s dish, played with the cats and loved to curl up with Mike. The two quickly formed an unlikely friendship and the video below will show you their incredible story.

Watch the video of Mike and Cropper below!

Sadly, after six happy years with Mike, Cropper crossed the rainbow bridge in 2007. Then, another fox named Jack moved into Mike’s house. Although Jack is a wild animal, he is so sweet and adorable. He loves watching TV with Mike and taking a bath in the sink.

Don’t miss this video of Mike and Jack!

According to Mike, foxes should not be kept as pets unless they have health problems and cannot return the wild. He also warns that fostering foxes takes a great deal of patience and you have to understand about their behavior.

If you love this story, let’s share it with your friends and family members!

People Are Sharing Photos Of Their Pets’ Most Epic Fail, And The Results Are Hilarious!

20+ Awesome Photos Of Animals That Love Interacting With Butterflies