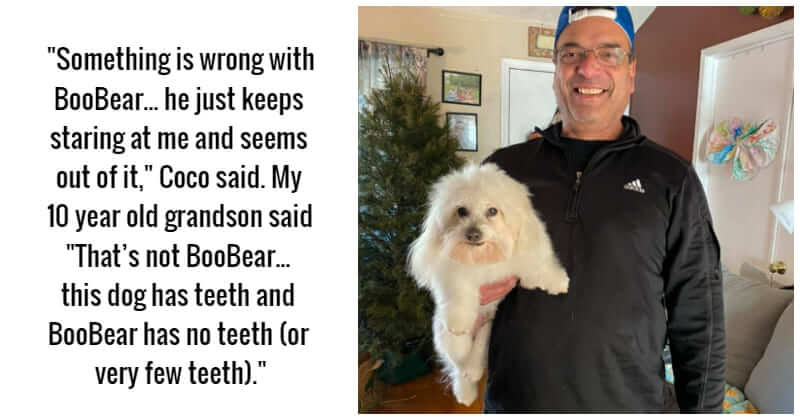 If you are a dog owner, you know that grooming is one of your dog’s basic needs. Regular grooming not only maintains his level of cleanliness, but it also helps to ensure the dog is healthy and comfortable.

Many dog owners prefer to groom their dogs on their own, but some like to take them to a professional groomer to save their time and energy. Furthermore, professional groomers have all the right tools to help our beloved friends look their absolute best. But sometimes, these dogs look so different that their owners don’t recognise them. This incident happened with a dog dad named Rudy Salazar when his wife CoCo asked him to pick up their beloved puppy BooBear from the groomer. The man somehow managed to make the most hilariously obvious mistake. He went to pick BooBear, but he came home with a strange dog.

When Rudy arrived home with the dog in his arms, CoCo noticed something rather strange. At first, she thought that the new haircut had transformed BooBear’s appearance into an entirely different pup. As it turns out, her husband had grabbed the wrong dog. When he arrived at the groomers to pick BooBear, he said “I’m helping my wife CoCo.” For this reason, they gave him a different little white dog, also named CoCo. And somehow Rudy failed to notice the mix-up.

“When he came home with the wrong dog he came up to me and said “Something is wrong with BooBear… he just keeps staring at me and seems out of it,” Coco said. “My 10 year old grandson said “That’s not BooBear… this dog has teeth and BooBear has no teeth (or very few teeth).” Fortunately, after realizing what had happened, Rudy immediately took the wrong dog back. The dogs were switched, and BooBear was soon back where he belongs. When asked whether Coco the dog came home safe and sound, CoCo the human responded: “Yes of course… hahaha. I don’t even think the owner of the other dog even knew that anything happened .”

After the truth was uncovered, Coco quickly captured moments on video and uploaded it to TikTok where it went viral immediately. Watch the video below, and we challenge you not to laugh watching this hilarious Dad fail!

The two dogs do look vaguely similar, so it’s hard to blame Ruby for his little mistake.

20 Pets That Tried Acting Normal But Failed, And Their Photos Are Hilarious

Kitten Miscalculates Jump Is Sure To Make Your Day