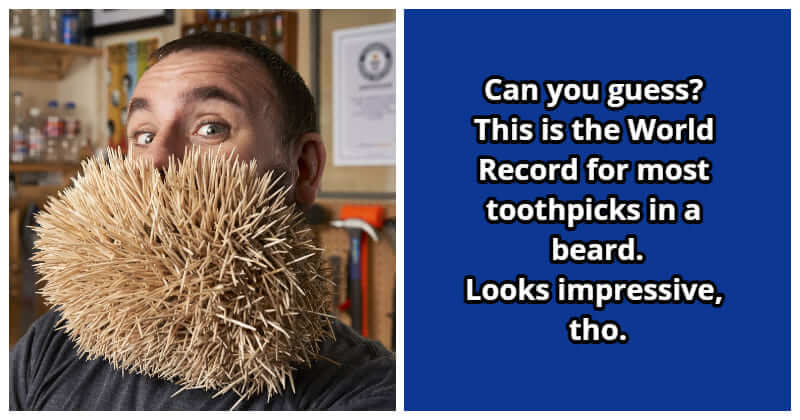 Making a new record may be the greatest achievement in the life of a person. No matter it’s an Olympic Games’ record or a new high score in your favorite game, it’s always worth celebrating. The Guinness Book of World Records is where you can find all kinds of records, from the most epic ones to the strangest and most ridiculous ones.

People can sometimes make a record that no one can ever think of. For example, you can find the shortest time to finish a bowl of pasta or the farthest arrow shot using feet kind of things in that book. Fairly to say, they are pretty impressive, but also weird and funny for anyone to see. Anyway, those weird things were officially registered to become world records, and here we have selected some of the weirdest ones to present to you. Scroll down and check them out in the list below. You may not believe but they actually exist. Enjoy.

#1. The Ramos Gomez family set the record for being the largest hairy family in 2000. They are four members of a family of 19 from Mexico who suffer from a rare condition called congenital generalized hypertrichosis (excessive facial and torso hair). #2. Antanas Kontrimas of Lithuania set the record for the heaviest weight lifted by a human beard. In 2013, Antanas lifted 63.80 kg with his beard. During his performance he lifted the presenter of the show Gupse Özay’ın. #7. Nick Stoeberl aka “The Lick” from Monterey, California holds the Guinness Book Of World Records for having the longest tongue, measuring 10.10 cm since 2012. #9. Garry Turner holds the record for the stretchiest skin since 1999. #11. Ram Singh Chauhan from Jaipur, India has the longest moustache at 14 feet. His facial hair was measured in Rome, Italy on the set of the Italian TV show “Lo Show dei Record” in 2010. And, he hasn’t cut it for over 37 years. #12. The Benetton Group set the record for inventing the largest condom. In 1993, they fitted a giant 72 feet condom over the Obelisque in Place de la Concorde, Paris, France to mark World AIDS day. #15. Most tattooed man: over 1,000 hours of body modification. Achieved by Lucky Diamond Rich of Australia. 15 Restaurants That Take Social Distancing To A Whole New Level

No Matter How Bad Your Day Seems, Always Someone Has It Worse Than You

14 People Who Preserve Priceless Treasures In Their Family Albums

20 Children Who Are Carbon-Copies Of Their Parents

20 Heartwarming Posts For A Wholesome Break

You’re Telling Me The 15 Photos Are True?

20 Entitled People With No Sense Of Reality