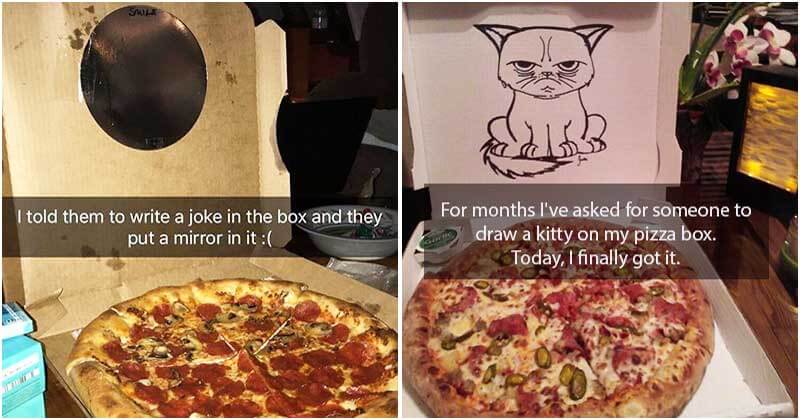 Pizza is one of the most popular food these days, and the reason is so simple – it’s delicious. Fatty, sweet, rich, and complex, pizza has all of those components. There are numerous restaurants for you to conveniently order your pizza, no need to go out. Those restaurants not only serve you tasty pizza, but they also know how to bring their customers a good laugh. When you order pizza online, there is a special section where you can add your requests. Many people ask for a joke or something fun in the box. And the pizza restaurants take advantage of showing their sense of humor.

We have piled up a hilarious list of times people got satisfying responses from pizza employees for their requests. Sometimes they are so surprised by the creativity of such humorous staff. Scroll down to check. These pics will surely put a smile on your face, and you may probably pick your phone up and order a pizza.

#1. “Maybe I should call Pizza Hut and get them fired…” #2. “They listened, they finally listened…” #4. “Before I left work, customer made an order asking for a “panda riding a giraffe while holding a red solo cup on the box” #5. “For months I’ve asked for someone to draw a kitty on my pizza box. Today, I finally got it. I am definitely amused!” #6. “My roommate asked the pizza delivery gal to “write something funny.” #7. “A guy asked us to write on his pizza box “something to cheer up my girlfriend.” Wonder how that went?” #9. “I deliver pizza part time. Somebody ordered online with the instructions “Draw A Classy Cat” #10. “Ordered a pizza and asked them to draw a giraffe. They nailed it.” #11. “Asked for a joke inside my Pizza box. Was not Disappointed.” #12. “We ordered a pizza from dominos and asked if they could draw something cool on box. Well done Dominoes” #13. “I work at Domino’s and was asked to draw a Spongebob meme” #14. “Asked the pizza place to write me a joke on the box, they delivered!” #15. “When you put “send nudes” in the Pizza Hut delivery instructions…” #16. “I asked Pizza Hut to draw a funny picture on my pizza box and this is the funniest thing I’ve ever seen”

#17. “Asked the pizza delivery guy to draw a space cat on the pizza box” #20. “Buddy of mine asked the pizza place for a joke in the box. This is what he got” 20 People Whose Passive-Aggression Is Hilariously Entertaining

Awful Designs That Prove Some Ideas Better Be Left As Ideas

“Enough Is Enough”: Satisfying Times People Stood Up For Justice On Social Media

20 Pictures To Prove That Humor Can Make A Happy Family

22 Times People Spotted Faces On Inanimate Objects, As Shared In This Online Group