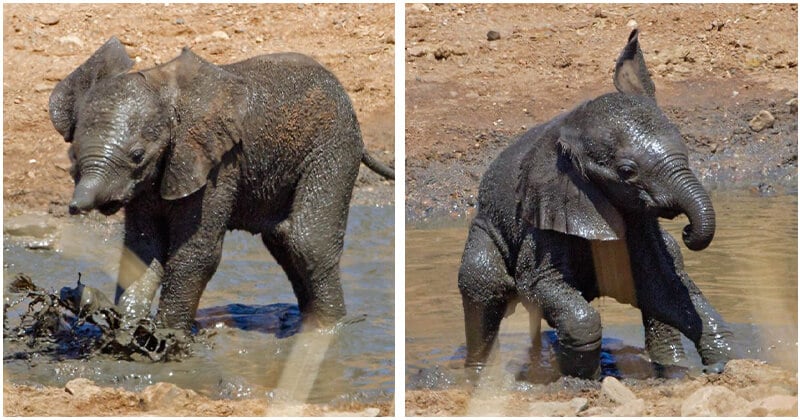 The world of children is a world full of fun. We used to have a lot of cool games to experience as kids, and undoubtedly baby animals could come up with their own ways to entertain themselves too. They may not have plenty of fancy toys or enormous playgrounds, but they do know how to make the most of the simplest things in life.

In these delightful pictures is a baby elephant spotted playing with the mud under the harsh sunlight of summer. Meanwhile, his herd was busy looking for some water which had become quite scarce due to drought at that moment. That lovely scene took place at Kruger National Park – one of the largest game reserves in Northern Africa with a high density of wild animals and was captured by a lucky visitor named Maureen Gibson. According to the 73-year-old pensioner from Eastern Cape, it wasn’t an easy time for many species at the park, and of course, these gentle giants are no exception.

“The herd of elephants came down the dry Mphongolo riverbed near Shingwedzi in the northern area of the Park, searching for sub-surface water at a time when the Park was going through a severe drought,” she said. “To find the water it was necessary for the adult elephants to dig in the sand until the water level was accessible.” However, when all the adults struggled with their own troublesome mission, our lovely little boy still managed to have fun on his own. Apparently, it was the very first time he discovered that tiny “paradise”. He loved it so much that even his mother couldn’t stop him from enjoying himself there.

“It was obviously the first time that this elephant calf has a chance to play in a muddy pool and he could not get enough of it,” Gibson continued. “Each time his mother encouraged him out with her long trunk, he ran straight back into the mud to frolic and play.” Needless to say, it’s always a pleasure to be able to witness such a joyous moment, especially to animal lovers.

“Photographing elephant calves is such a pleasure as they are so cute and unpredictable – their antics can always guarantee to bring a smile to my face,” Gibson shared.

If you find this little guy endearing as we do, please share this post with your loved ones!

You’re Wrong If You Think That Hairless Kittens Are Creepy Aliens, They Are Adorable Little Aliens

This ‘Long’ Dog Is Stealing Hearts Over The Internet, But His Snout Is Even Longer