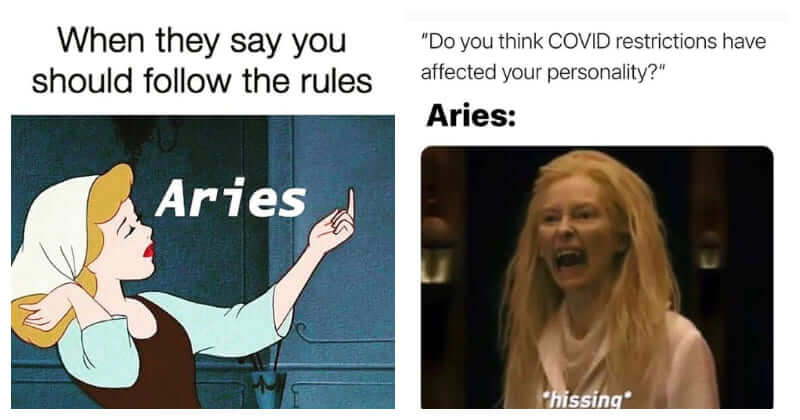 You find this article because you’re wondering what bites an Aries’ head off. Surely you’re not the only one to question it, because Aries is well known for their hot temper.

The anger of Aries comes from the Mar planet, which is also governing War. For this reason, people born under the sign of Aries don’t mind conflicts, they are willing to pick a fight. When Aries is mad, their anger is very explosive, they don’t know how to hold it.

Yes, Aries is an indisputable hot-head of the zodiac but their anger comes and goes quickly like a tornado. So, finding out the causes of Aries’ anger is a good solution for this case. Let’s scroll down and discover what makes Aries mad! #2. Arians are meant to break rules, not follow them. #3. The best way not to make Aries calm down #5. This debate is over when I say it’s over #7. Everyone knows it, but don’t say to Aries #12. Give me a reason not to punch on such a idiot’s face #13. People thought we were angry, but they got tricked by our face What Sagittarius Are Like When They Go To Work, Describing 15 Funny Memes

Get To Know Sagittarius Personality Through Their Mood…Let’s Try It!

The 12 Zodiac Signs As Disney Princesses

Get On Well With A Taurus By Exploring Their Needs

How You Start Your Day Based On Your Zodiac Signs, Shown In 15 Amazing Memes

Drama Kings And Queens Of The Zodiac Signs – Geminis, Proving In 15 Funny Memes