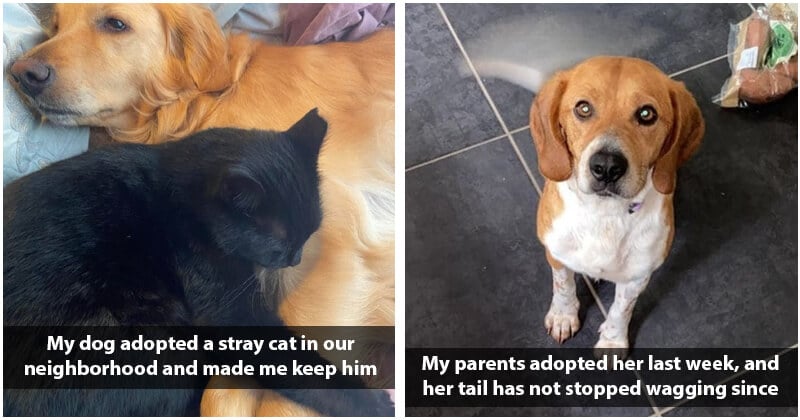 Each year, approximately more than one million dogs and cats are euthanized because animal shelters are too full and too few people consider adoption when looking for a pet. Therefore, anyone who chooses to adopt stray animals or pets at shelters instead of buying pets at shops deserves to be called our superheroes. The number of euthanized animals could be reduced dramatically if more people adopted pets instead of buying them. When we adopt pets, not only do we save these pets by giving them forever homes, but we also help shelters have more space for other animals who might desperately need it. And of course, poor cats and dogs who got help from kind-hearted people will always be grateful to their saviors.

We at Aubtu can’t stop admiring people who are willing to help animals in need. That is the reason why we decided to share with you 20 heartwarming stories of poor animals who met their heroes and their guardian angels at just the right moment. Through this post, we hope that every lonely animal finally finds a loving forever home. Scroll down to enjoy!

1. “2 stray cats gave birth under our house, so we took them both in.” 2. “We adopted this 11-year-old kitty, and for months she wouldn’t let anyone touch her. A year later, she insists on sitting in my lap.” 3. “We adopted Woody from the SPCA yesterday, and he’s a cuddler.” 4. “My dad and his neighbor agreed to take in these stray cats who live in their gardens and pay for them together.” 6. “We adopted brothers and they sleep together every day.” 7. “A stray cat followed my boyfriend home. After a vet check-up he finally met our dog Noodle for the first time today.” 8. “Adopted this 10-year-old gentleman yesterday. He’s my first pet ever.” 10. “Meet Charlie! I just adopted my first dog! He has bad hearing, but is an absolute love bug.” 11. “I adopted these little guys yesterday and they’re already settling into their new home.” 12. “I decided I needed a companion. Meet Bunsen, adopted from the Humane Society at 4 months old!” 13. “I adopted a new kitten a few weeks ago, and was worried she and my other cat wouldn’t get along. I found them like this after work.” 14. “I just adopted this little girl! She’s missing an eye, but that’s okay.” 15. “One month ago I found a stray kitten outside my apartment. This is Una on the day I found her compared to today.” 16. “This is Shadow. My parents adopted her last week, and her tail has not stopped wagging since.” 18. “After months of loneliness, I adopted this little guy. Meet Frodo.” 19. “After almost 9 years of wanting a cat, I finally adopted these brothers. I still can’t get over their bond.” 20. “My dog adopted a stray cat in our neighborhood and made me keep him.” Have you ever adopted a pet at a shelter or a stray animal? Share your kind stories of animal adoption in the comments below! Don’t forget to share this post with your friends and family members!

Nothing Is Better Than A Nap In Any Place We Like, Showing In 30 Photos