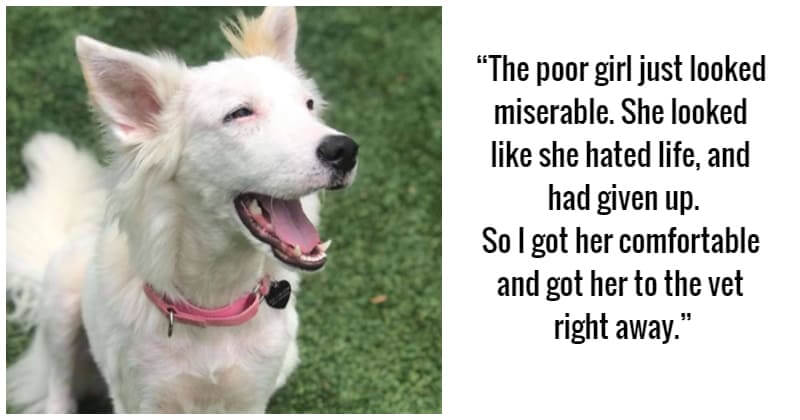 Everyone prefers having a better life if given a chance. But to do this, they must be brave to approach people who may help them and grasp the chance. This also happens to dogs. You can find many dogs out there who haven’t found forever parents yet. They have been wandering the streets to look for help. Thankfully, love and kindness exist everywhere. They are saved, brought to a shelter, and helped to find a new home. This changes a dog’s life and also teaches us more about kindness, especially to fragile animals. A nearly hairless dog Gardenia becomes so white and fluffy after rescued and adopted. The poor pup made an incredible transformation. Let’s scroll down to know her story! 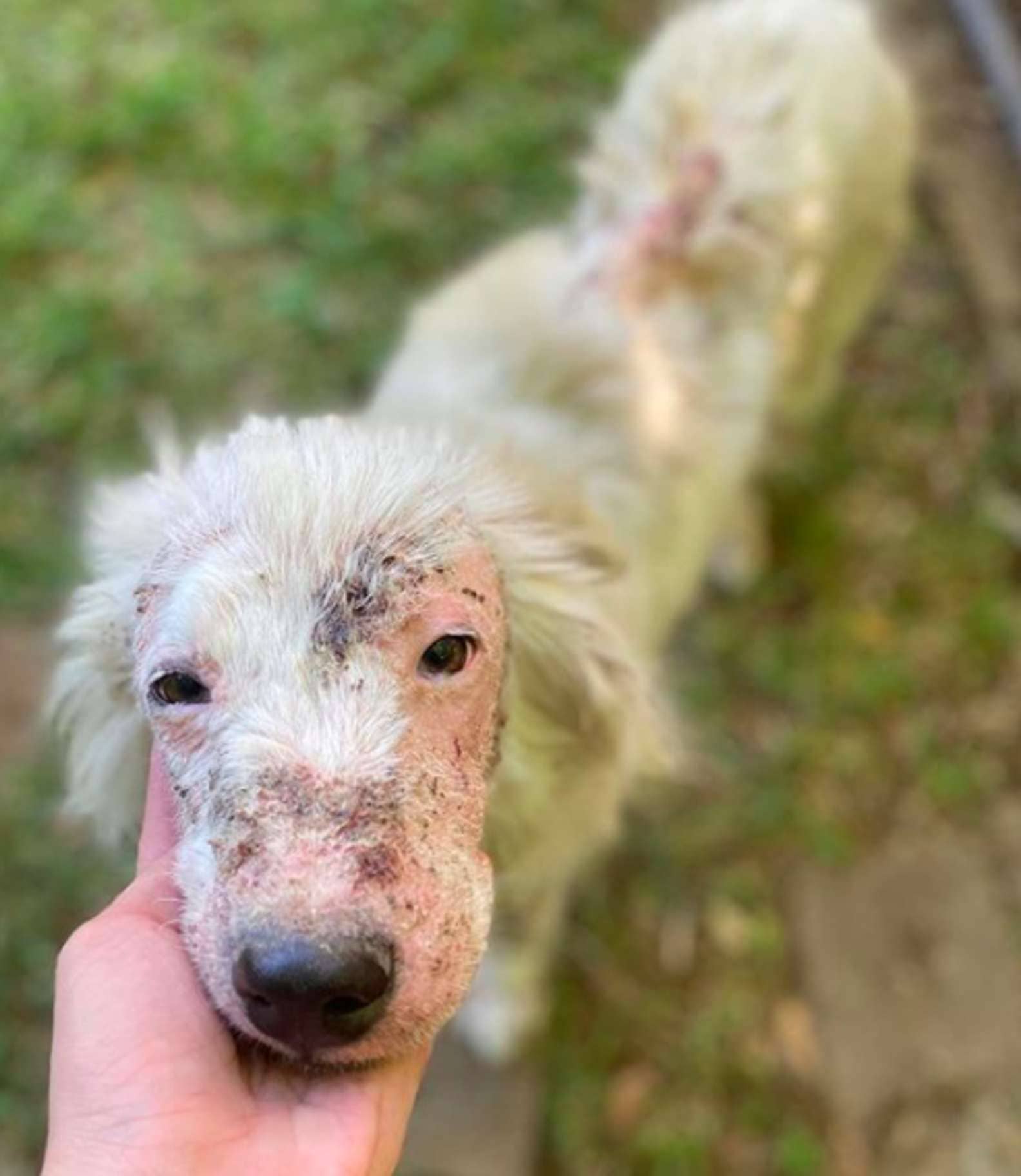 For months, a hairless dog named Gardenia has wandered the streets of Houston, Texas, looking for help. One night, the poor girl spotted a woman in a parking lot and decided to come to her to ask for help. 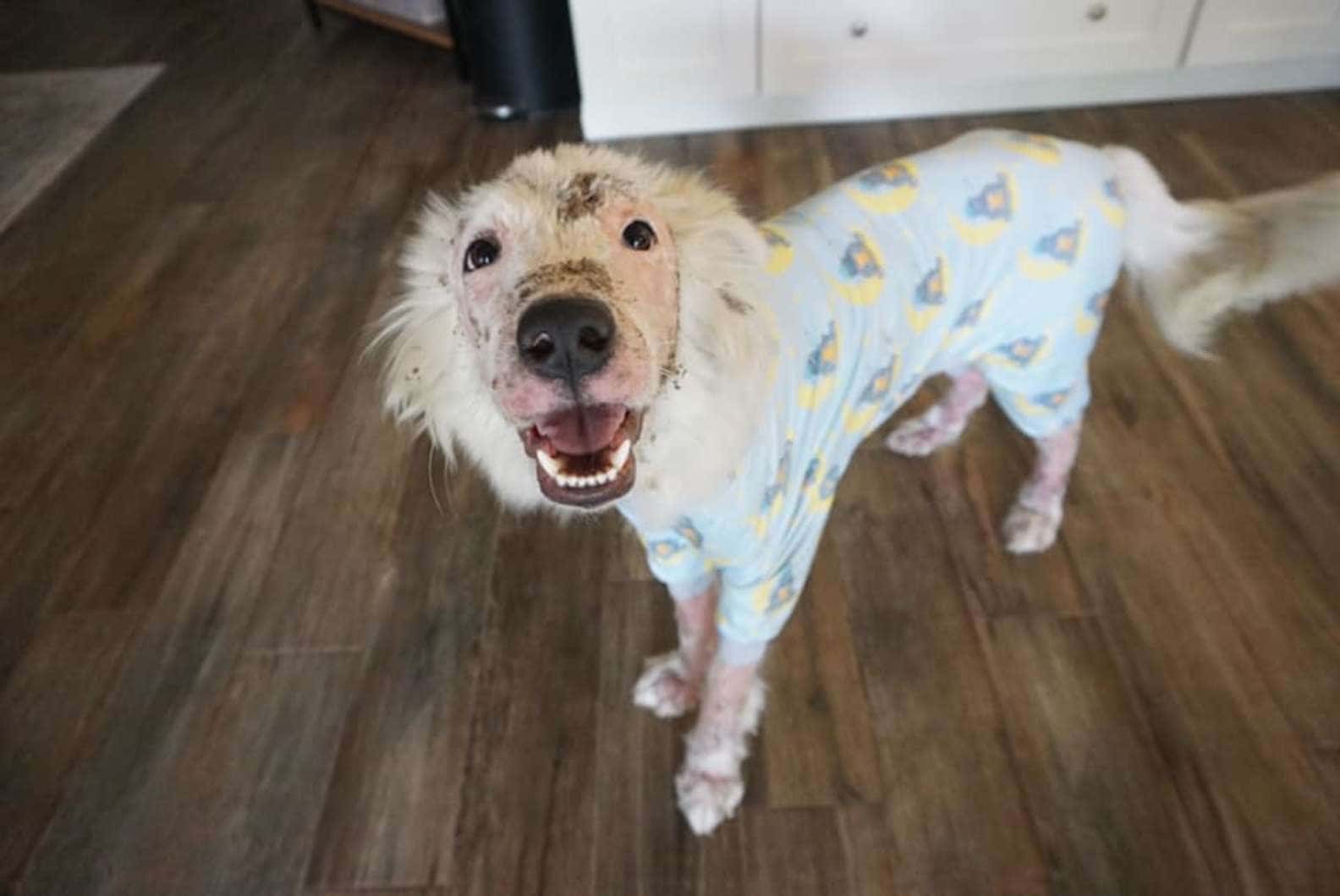 Gardenia approached the stranger, who gave her some food and slipped a leash over her neck.

In order to help the poor puppy, that woman posted a video of Gardenia on Facebook, and Caitie Evers spotted it immediately. “I have become known as the sucker for mange cases,” Evers told The Dodo. “People will send me or tag me in any post about a dog who’s a stray with mange.”

Evers knew that Gardenia’s look at that moment might scare some, but she believed that Gardenia used to be an adorable and pretty girl.

Evers decided to bring Gardenia home and care for her. “When you pick them up off the street like that, all they want to do is is sleep,” Evers said. “So I got her comfortable and got her to the vet right away.” 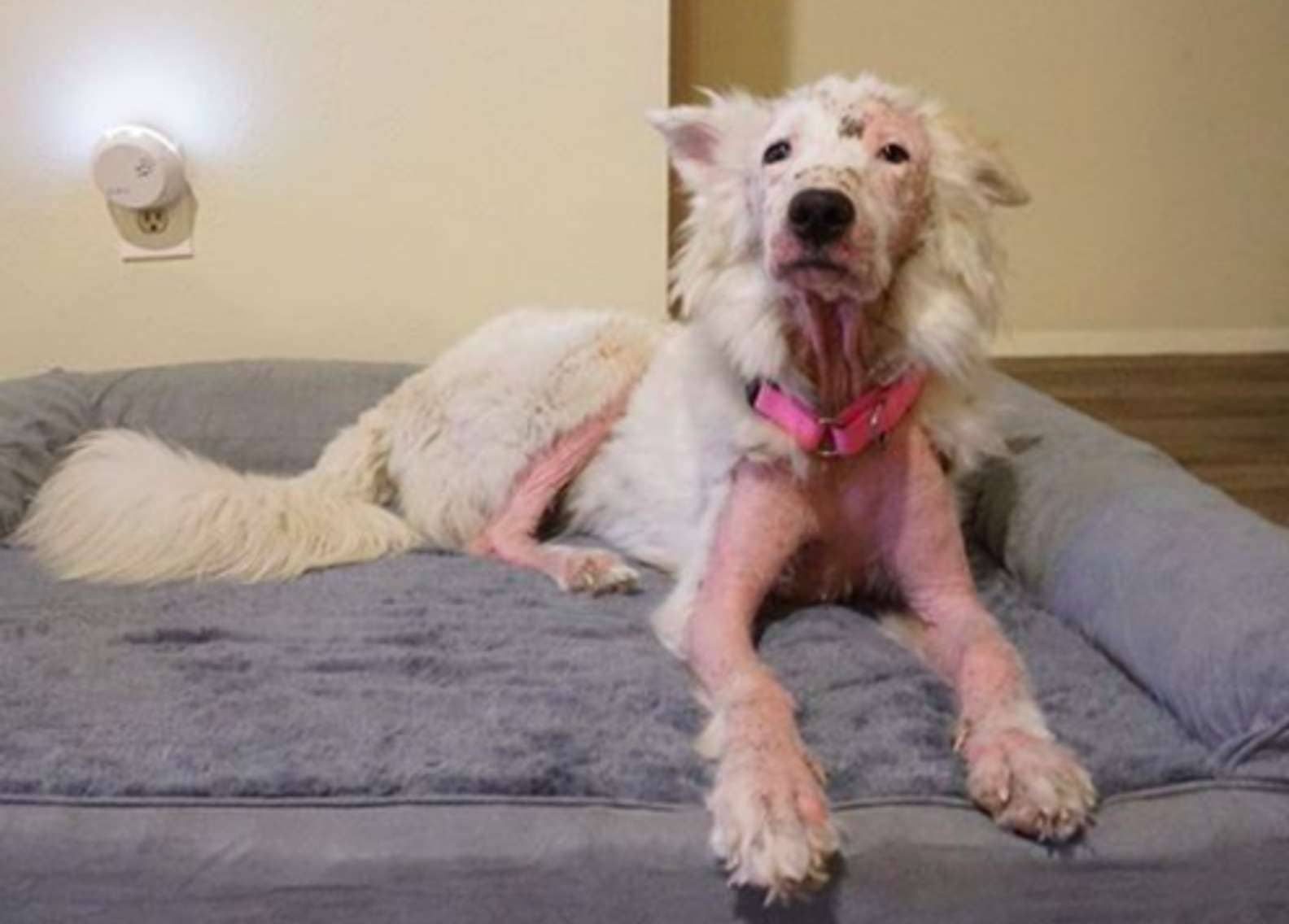 The pup was taken to the hospital and the vet found that she was suffering from demodectic mange, a noncontagious form of the skin disease that can be treated easily with medication.

“She had tons of mange all over her, as well as secondary infections from the mange because it had clearly been like that for a while,” Evers said. “It was really bad, her whole back was raw.” 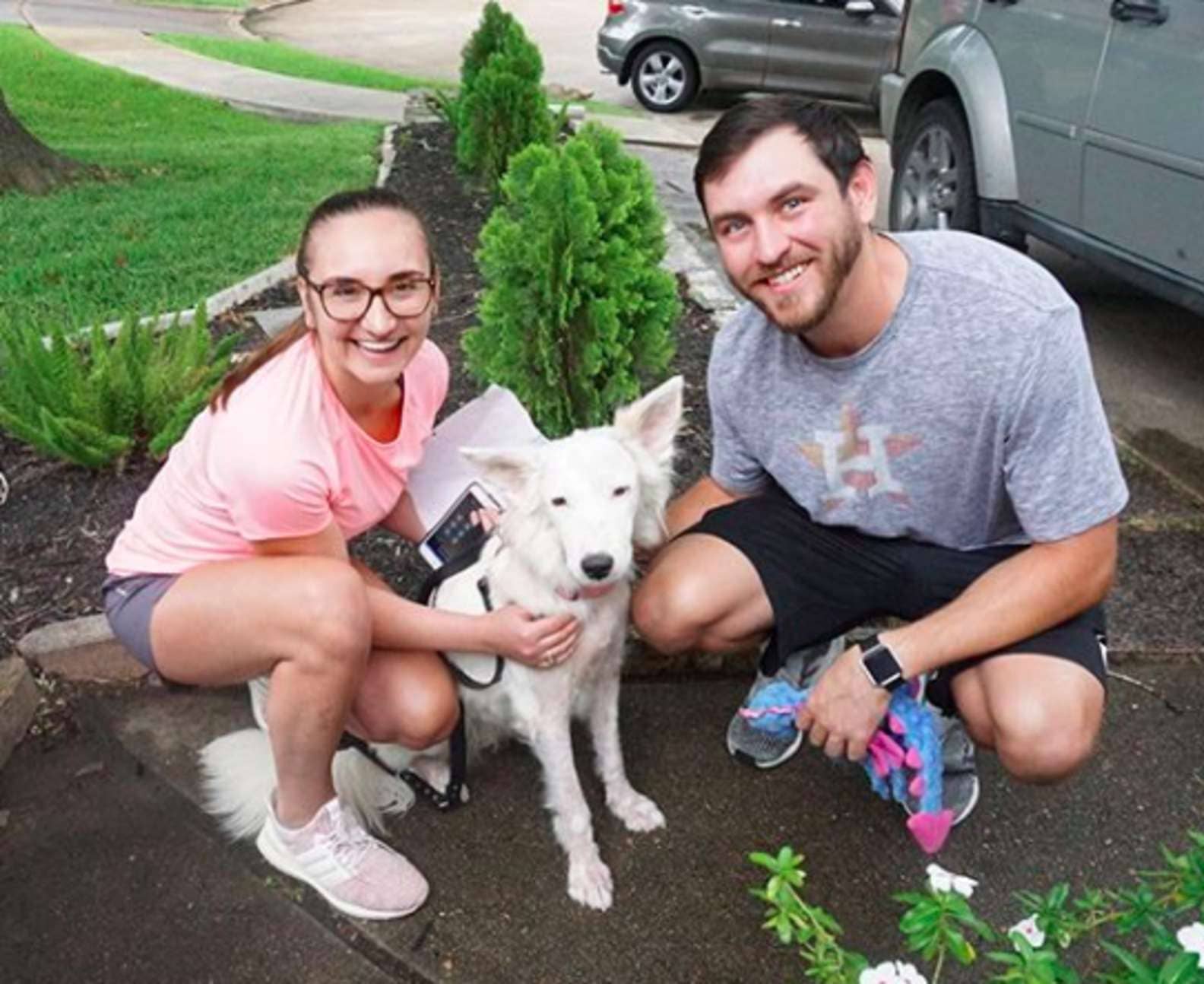 When the mange started healing, Gardenia was clearly uncomfortable and itchy – shown through her actions. “She was very timid at first,” Evers said.

“The poor girl just looked miserable,” she added. “She looked like she hated life, and had given up.” 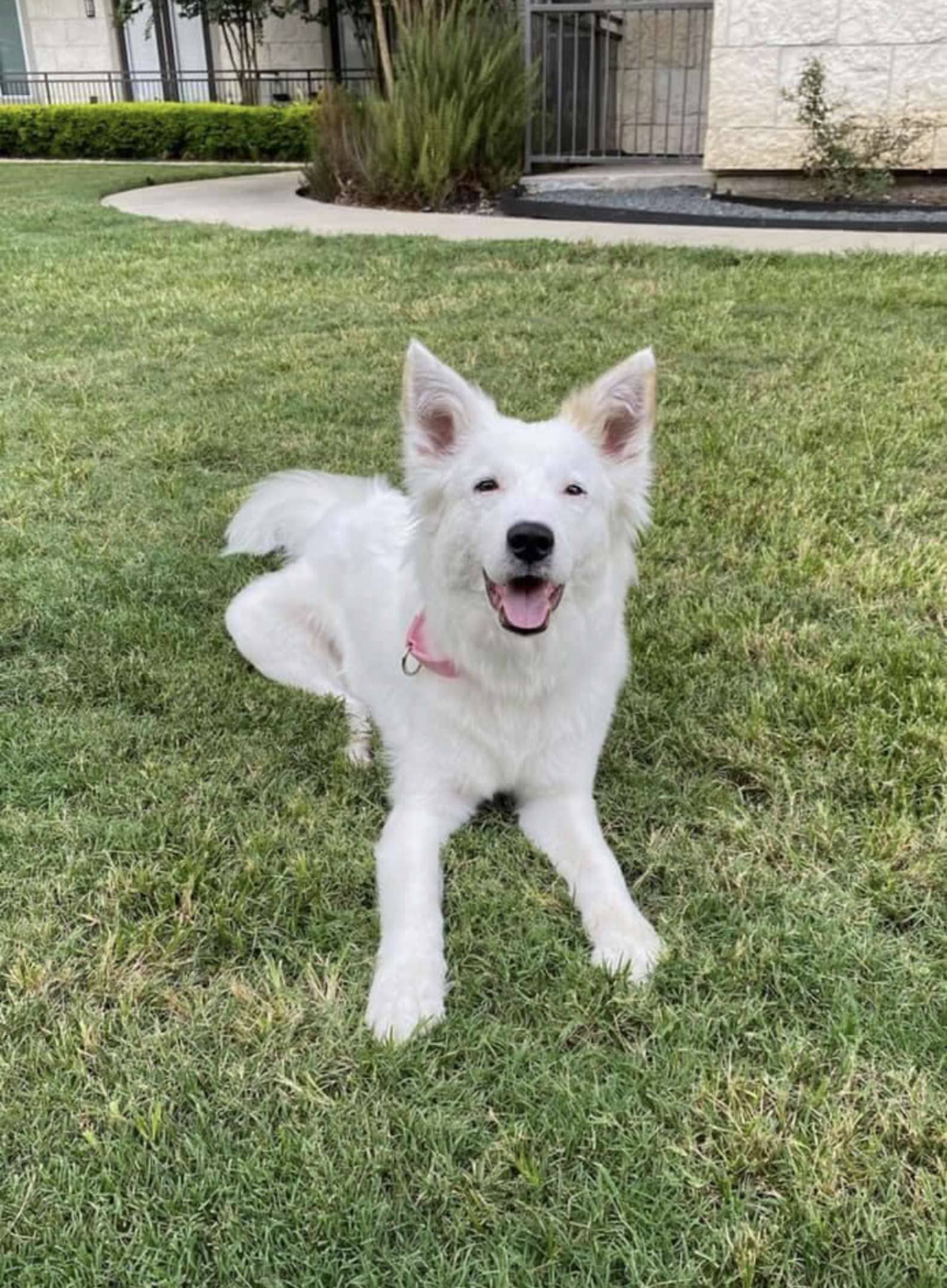 Thanks to antibiotics and medicated baths, slowly Gardenia’s fur began to grow back.

After several weeks, Gardenia began to feel better and came back with her bubbly personality “She turned into a goofball,” Evers said. “She loves to pounce, loves to play and she fell in love with my German shepherd.”

“The first two weeks it’s hard to tell if there’s a change, and then it’s like, ‘Bam! Different dog,'” Evers added. “And now she’s so fluffy and beautiful.” 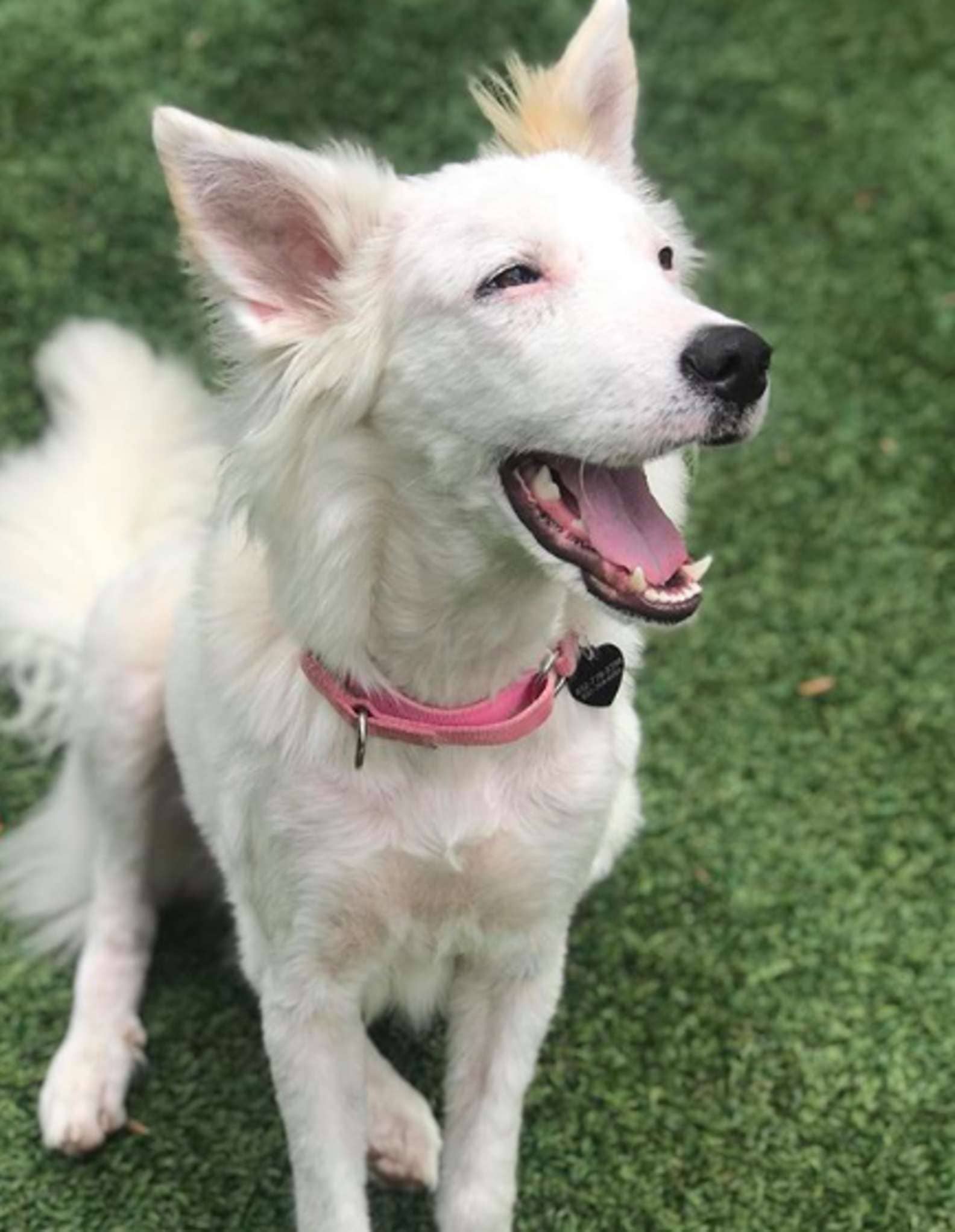 Evers knew it was time to finding Gardenia a forever home, and soon her friend Bri Tripaldi mentioned that she was interested in meeting the pup. Tripaldi and her fiancé had been following Gardenia’s story from the beginning, and knew that Gardenia was for them.

“I watched as she came out of her shell and became the sweetest pup,” Tripaldi told The Dodo. “We got to go meet her and we instantly fell in love.”

“On our way home from meeting her for the first time, I looked at Jayden and was like, ‘She’s the one,'” Tripaldi said. “And boy was I right!”

Raccoon Tries To Steal Food, But Then His Friend Pulls A Prank

Meet Sasha, The Adorable Cat Who Loves To Swim