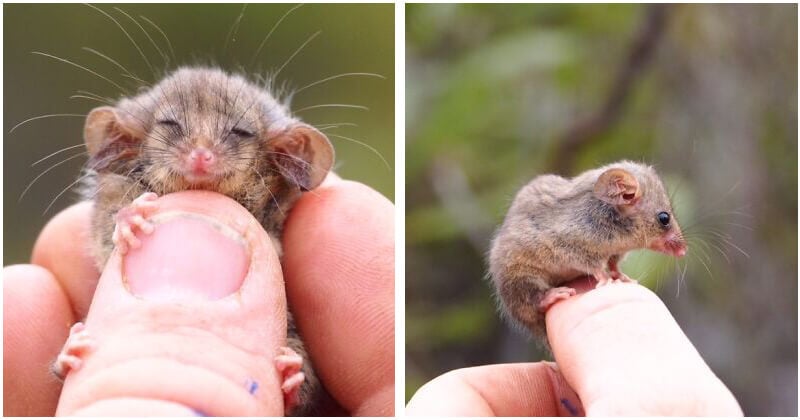 People on Kangaroo Island, Australia can hardly forget the horrific bushfires that scorched almost half the island last summer. Fortunately, a miracle has happened recently as a conservation group roamed around the island and discovered a little pygmy possum, which was thought to be locally extinct after the fires destroyed their habitat. Kangaroo Island Land for Wildlife spotted this little survivor while conducting a fauna survey of the unburnt forest and they were stunned by what they stumbled upon.

The Tasmanian pygmy possum (also known as the little pygmy possum or tiny pygmy possum) is literally the world’s smallest possum, so it’s hard to even imagine how could that baby make it through such a devastating disaster, not to mention these tiny critters were rarely sighted on the island before the wildfires – which were said to spark after lightning struck a park. “The status of the little pygmy possum (Cercartetus lepidus) was unknown pre-2020 bushfires on Kangaroo Island. With most of its habitat severely burnt, we are happy to have detected the species for the first time since the fires in the largest unburnt patch,” fauna ecologist Pat Hodgens shared about the amazing rediscovery on his Twitter. As you can see in the picture above, the little pygmy possum they found (right) was even smaller than a Western pygmy possum (left). It weighed only 0.25 oz (7 g).

“There’s only really been 113 formal records of the species (ever on Kangaroo Island). So certainly not very common and, obviously, the bushfires burnt through much of that habitat that species had, but we were certainly hopeful that we would find them,” Pat Hodgens said in an interview with the ABC. The little pygmy possum was rediscovered as a part of larger investigations to search for and help protect all the species that have survived on the 1,701-square-mile island. Thanks to their persistent efforts, over 20 other wildlife species have been discovered alive, including a bibrons toadlet, a southern brown bandicoot and a tammar wallaby. “(We’ll) do everything we can to protect them to ensure that they hang around during this pretty critical time,” Pat Hodgens continued. “It’s very important now because it is kind of like the last refuge for a lot of these species that really rely on very old long, unburned vegetation.”

Please share this amazing news with your loved ones!

20 Animals Who Are So Smart And Quick-Witted

Horse Plays Dying Drama Whenever He Gets Ridden

20+ Devoted Pawrents Who Go The Extra Mile For Their Pets