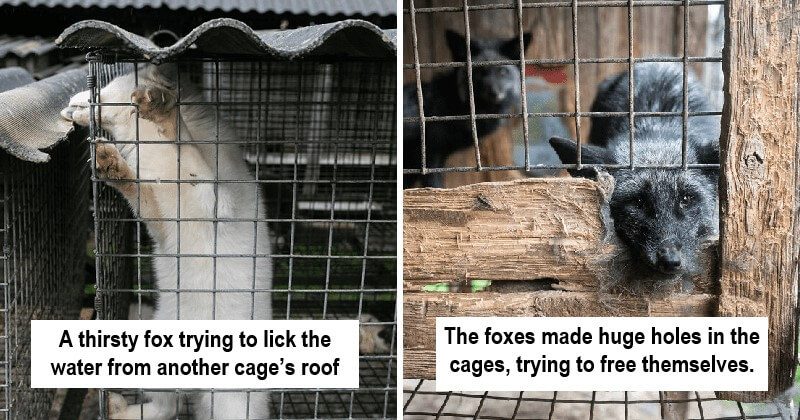 Every animal deserves to get good treatment. But you can still find many people out there that abuse their animals. These people abandon their animals or leave them to starve. Some are luckily rescued while some cannot wait until someone come to help them. No one wants to witness this. It’s heart-breaking.

50 foxes and raccoons in this story, however, are the lucky ones. They are rescued from a fur farm after left to starve here. The people living nearby spotted them and called the authority to help these poor animals. Luckily, they come in time. At the end of October, the Polish animal rights organization Otwarte Klatki (Open Cages) received the information from the residents living near a fox farm in Durzyn (Greater Poland Voivodeship). They saw a dozen foxes wandering around the village that had probably escaped from the farm.

When the activists intervened the farm, they were shocked about what was happening there. Most of the foxes were already dead. Some had been killed by electrocution (the usual way to kill foxes for fur), but many died of hunger and thirst.

There were still foxes that were alive but thirsty and starving. They stayed in the same cages with the dead ones, trying to cuddle the dead body of their friends. These living animals bite the wires to make huge holes in the cages, trying to free themselves. That was the reason why their teeth were broken. These poor foxes were also scared of humans who came to help them. They kept cuddling with each other.

Along with foxes, raccoon dogs were also found on the farm. They had the same situation. The activists later found out that the fox fur farm’s owner had gone to jail. The person who was supposed to take care of the animals didn’t do his job. And this led to the nightmare of the animals living here. Activists were even speechless when seeing their situations. Luckily, they came quite at the right time, and saved some. In total, about 50 animals (foxes and raccoons) survived and were rescued.

They are now all safe and under veterinary observation. At the same time, Otwarte Klatki is raising money to help them, initially cover the cost of the medical treatments and build them new homes.