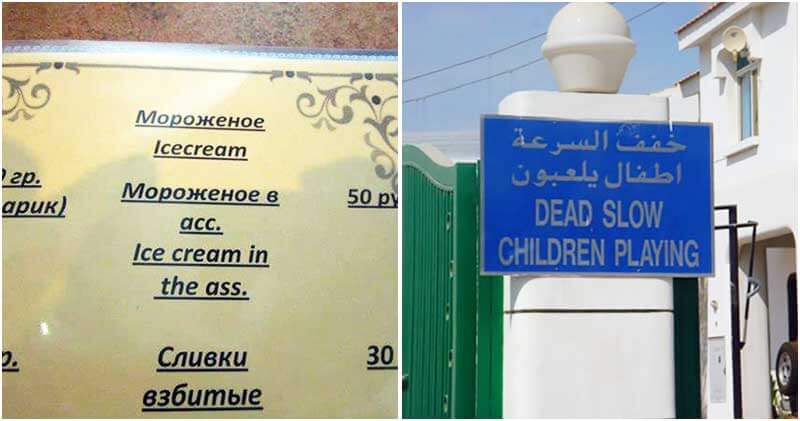 Traveling non-English speaking countries, you must have seen that most of their signs translated into English. It’s obviously a clever move since English is considered the global language. We all know that not everyone is good enough at a foreign language not to get lost at translations. In this case, translation tools are a great need. But still, sometimes, you should not put too much belief in those tools. Because instead of translating your words correctly as you wanted to mean in the first place, they can turn your English translations into hilarious fails, making any reader feel so confused.

We have rounded up some of the funniest translation fails that people spotted while traveling. Scroll down to give them a look, and prepare for a good chuckle. #3. “a donkey that intimately trim the skirt” #4. Silence of the lamps #11. Math teachers will cry reading this #12. What kind of flamingos are these? #13. Somewhere in the parallel universe #15. “A buffet sign reads “ميت بول” (“MeatBall”) transliterated into Arabic, with its translation as “Paul is Dead” in English, a literal translation of the text! The employees of the Erbil International Hotel seem not to have been aware that “Meat Ball” was not, in fact, an Arabic or Kurdish word!” 15 Dreadful Pictures That’ll Give You Your Worst Nightmares

15 Hilarious Tweets From Parents Who Seem To Have Had Enough

20 Anonymous Stories Of The Weirdest Reasons Why Couples Divorced

Kids Decided To Cut Their Own Hair, And The Result Will Make You Laugh Your Head Off

10+Reasons Why You Should Never Trust Social Media

20 Weird Pictures Straight From The Depths Of The Internet