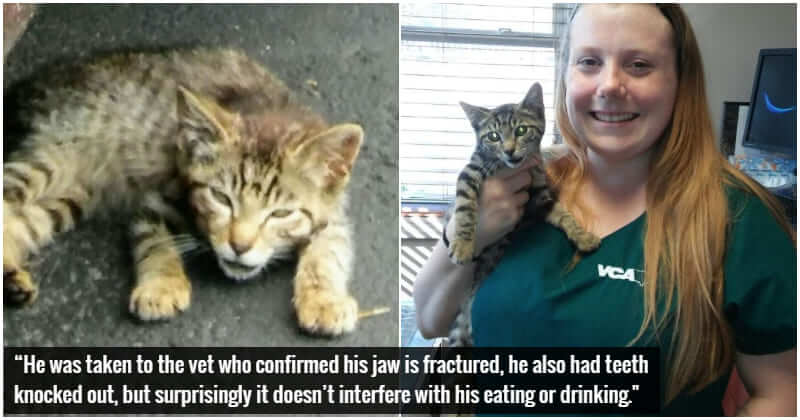 This is a touching and amazing story of a kitten named Keanu who was rescued from an apartment complex in Belleville, NJ. The poor kitten had his jaw fractured by a hard kick by one of the maintenance workers who works at the complex. But thankfully, some animal rescuers came to save him and gave him a second chance at life. According to the rescuers, the complex had many stray cats around, but the new management company didn’t want them and always found ways to chase them away. And suddenly, the poor cats and kittens started to disappear. Some of them were poisoned, injured, and others trapped in crawl spaces and illegal leg hold traps. Keanu was smart, so he was able to avoid being trapped. For this reason, when the rescuers came to help him, he was curious about them and just looked at the trap. After being kicked very hard in his face and being trapped many times, he was clearly afraid of people. “I was able to trap him after a few days. He was taken to the vet who confirmed his jaw is fractured, he also had teeth knocked out, but surprisingly it doesn’t interfere with his eating or drinking. The vet decided since he is a kitten his jaw should be left to mend naturally and they will closely monitor him. He is thriving,” one of the rescuers said. The rescuers named him after Keanu Reeves who loves animals. Luckily for him, he found his forever home with 11th-hour rescue. Everyone is so happy to know that the kitten has a new home and beloved owners. To Keanu, life is good, and he surely lives it to the fullest.

Watch his video below:

We think the scumbags involved in harming the precious cats should be arrested and put in jail plus given a major fine. What do you think about this? Let us know your thoughts in the comments below!

If you love Keanu and his story, please share this post with your friends and family members to raise awareness about saving and helping animals.