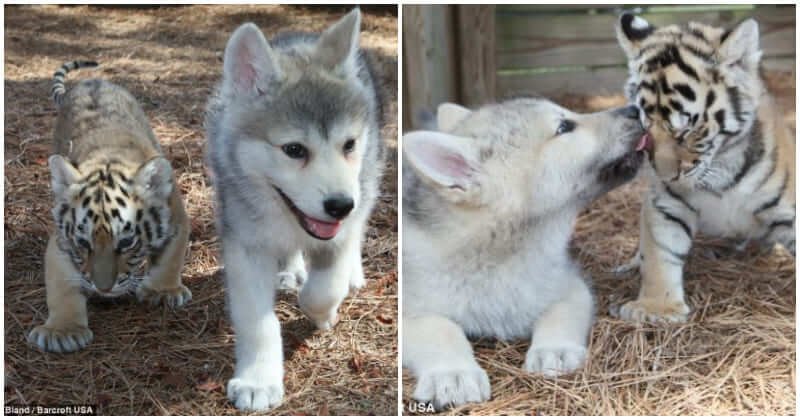 Friendship knows no bounds. It comes in all shapes and sizes and breaks all stereotypes. Who says animals that are supposed to be enemies in the wild can’t be friends? They even build a unique bond. It’s quite sad to think of their separation one day, but these odd friends still enjoy their time together. It’s the story of the adorable and playful timber wolf and Bengal tiger cubs today. The cubs were introduced to each other when they were just 2 weeks old. They were separated from their mothers to ensure their survival and were raised at TIGERS – The Institute of Greatly Endangered and Rare Species in Myrtle Beach, South Carolina. Two cubs bonded so quickly. They soon became best friends and loved hanging out with each other. They never think that they might be sworn enemies when they get older or are released back to nature.

The young wolf and tiger were enjoying their childhood together. They got tons of fun when staying with their friends. At three months old, the wolf cub the wolf was nearly double the size of its tiger bedfellow.

The strong and energetic wolf cub made use of its advantage. Its favorite game is to playing wrestling with its friend without hurting each other. Interestingly, the tiger cub seemed to “dominate” over its canine friend. He was smaller than the wolf but he would grow up to a majestic animal.

“At the moment the tigers will have a size and weight disadvantage to their canine friends. However, as I am sure you will have guessed, even though the wolves are bigger at three months, after another five months it will be the tigers who will be able to push the wolves around,”. said Doc Bhagavan, the founder of TIGERS. When the young animals were one year old, they had to be separated. The tiger cub weighed around 250lb compared to the wolf at 180lb then. Their size difference and species difference are apparent.

Although the pair no longer stays with each other, they had joyful childhood together. This is precious, right?