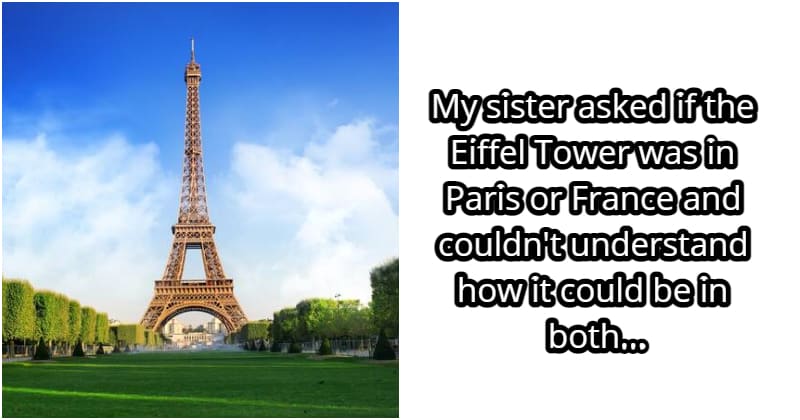 We cannot deny the fact that stupid moments happen now and then. Humans are just a bit weird sometimes, but that’s okay. And then, the situation becomes more hilarious and awkward when the subjects are the exact people around us. Well, we’re just shocked, overwhelmed, and amused at the same time.

When Reddit user u/bost724 posted the question “What was your ‘This person is on another level of stupid’ moment?” on r/AskReddit, it received tons of replies, with a myriad of inexplicable stories about stupidity. In the list below, we have chosen out some of the finest to present to you. Scroll down and see them now. I’m an identical twin and have been asked all manner of utterly ridiculous questions about it throughout my life. But I think the stupidest was when a girl once asked me “do you ever get yourselves mixed up with each other?” I responded “are you asking me if I ever sometimes think I’m my brother?” she replied, “yeah.” I used to work with a girl who was sweet but so dumb. We were in a meeting once and somehow someone mentioned baked ham. My manager said “Ugh I hate ham. It looks like human flesh.” The girl I mentioned was sitting next to me and looked horrified and whispered “Does ham really come from people?” The dude burned down his convenience store for an insurance claim and stopped the milk and bread deliveries the day before. Edit: Woah. My top-rated comment is me announcing one of my sister’s airhead moments haha. I feel like I need to defend her now.

This happened when she was like 14. She’s 26 now. She went on to graduate from college and graduated top of her class.

She later clarified that she meant to ask if the Eiffel Tower was in Paris or elsewhere in France but she clearly didn’t say it like that.

She’s gonna kill me when I tell her how much attention this got. Dated a guy~ we watched TITANIC…. he thought the movie was stupid because the boat sank. It wasn’t believable. You can’t recover from that. Ever I work for Parks Canada in Yoho National Park. I have been asked the question (seriously), “Where do you keep the animals at night?” twice in my career. To this day I still find great joy imagining what they thought was going on each night as we “collected” every large animal in the Parks. Rescued a coworker on the side of the road with a flat tire, waiting for the tow truck, I pointed out the nail at the top of their tire. They scoffed and looked at me like I was the stupidest person in the world and exclaimed

that’s not true bc it’s flat at the bottom

I just walked away and never brought it up again I got a concussion a while back. A friend of mine told me not to come close because it might be contagious. They weren’t kidding. I moved to the UK from Germany. A guy asked me if we had colors in Germany.

When I read yesterday that people think ocean water and sand are giving them coronavirus, rather than realizing it’s because they are spending time on a crowded beach with strangers. Smh

I worked at a restaurant and we had a dish that was just a whole grilled chicken, chopped into pieces. A woman who ordered for delivery called us, absolutely scathing, complaining that her order of one whole chicken only contained TWO chicken breasts. Had to explain to the grown-ass woman that chicken only has two breasts.

The time a friend told me how much he hates potatoes….while eating French fries and I literally blew his mind by telling him French fries are potatoes.

I once worked in a midwestern grocery store deli and I was trying to explain to a woman that the name brand and generic brand of the macaroni salad that we carried were in fact identical. The woman yelled at me saying she could only have the generic brand because “one is made with mayo and the other is made with mayonnaise and I don’t like mayo”. When I tried to explain that mayo is an abbreviation of mayonnaise, she just said “I’m from the south, I know my food” and tutted away.

This was my first experience in retail where I learned what many customers would be like.

Seasons were changing, so we put a lot of shirts we had to get rid of in the front and made them 50% off. I was working the register when a woman came up to buy her things. I rang her up and could see a look on her face like something was wrong. That’s when the following happened.

I thought that maybe her item was on sale, so I asked if she could point out the sign because I wasn’t aware of it. It was a small store and we didn’t have to walk anywhere.

Back when the Fukushima nuclear power plant disaster happened we were discussing how the reactor had failed in a science class. 5 minutes into the conversation a girl piped up and said “I don’t see what the big deal is. Why can’t we just regrow it?”

She dead ass thought a nuclear power plant was… A plant

This Guy Uses AI To Create Real-Life Version Of Popular Cartoon Characters, And The Result Is Amazing

20 Employers Who Are Complete Douchebags

You Know, You Don’t HAVE To Share Everything You See On The Internet