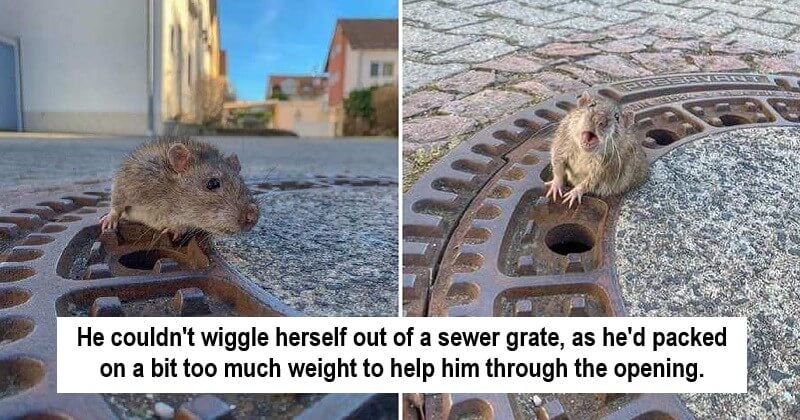 Many people hate sewer rats and typically avoid them on the streets at all costs. That is why they are not the type of animal that inspires happy stories about animals. However, even these terrible creatures can elicit sympathy from us when they are in trouble. That’s exactly what happened when kind-hearted local residents in Bensheim saw a little rat trapped, they were ready to help set this rodent free. The story happened a few days ago when two little girls heard a loud cry coming from a nearby sewer, then they spotted a poor chubby rat trapped in the hole of a sewage drain cover. He couldn’t wiggle herself out of a sewer grate, as he’d packed on a bit too much weight to help him through the opening. The family of two girls was quick to call Berufstierrettung Rhein Neckar, a local animal rescue organization in Germany to help the rat. When volunteers from the rescue group arrived, they realized they weren’t able to rescue the rat alone without the right tools, so they called the volunteer firefighters. Although rats to be pests and some probably wouldn’t even bother saving the animal, the whole firefighters arrived to give a hand. Luckily, the rat was rescued successfully and experienced no injuries. Then, she was released back to the sewer and all of them hope that she won’t get stuck in sewer cover again. Amazingly, the fat rat seemed to send a message to those who’d come to save him before disappearing: “He made a brief look back at us as if to say, ‘Thank you — and yes, I know I need to go on a diet,'” Steinbach said. After the rescue was complete, those there to help were greeted by two children from the family who called to save the rat’s life. To some people, their efforts to save a rat might have seemed wasted, but to Steinbach and the other volunteers, their efforts were not all for naught. The girls drew them an adorable picture of a rat to express their appreciation to those who’d heeded their call. “We make no difference about what kind of animal needs help. We are in animal rescue, not in pest control,” Steinbach said, adding that reaction to the rescue has been mixed, though mostly encouraging. “We got some bad messages from people saying that rats are pests, but we got many more good messages and thanks from a lot of people.” We hope that you will share this touching story with your closest friends and loved ones!