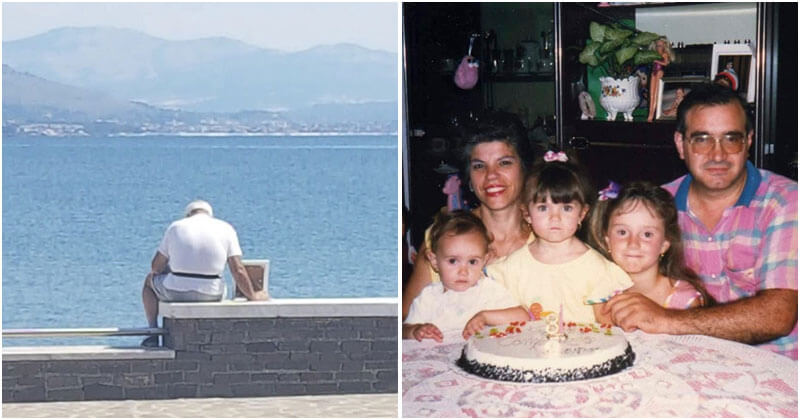 A heartwarming photo of an older gentleman hugging a framed picture and looking at the beach recently took the internet by storm. The viral image was captured by Giorgio Moffa, the owner of Italian restaurant and shared it on his Facebook page.

He captioned the post (translated from Italian): “I don’t know this wonderful person I just know that his love was definitely a great love. I saw him cry. I think men like that no longer exist. Sending you a strong hug, dear friend, you are a great man.”

Giorgio first saw the man in early June and took a picture of him sitting next to the picture. After it went viral, he decided to approach the gentleman and have a chat. He was sure that there was a great love story behind it.

The man in the photo is Giuseppe Giordano, a 70-year-old pensioner who lives in Italy. Every day at sunset, he goes to the beach, with the photo of his late wife, Ida. He just sits there and enjoys the view of the beach where they spent the early days of their relationship.

His wife passed away from an illness in 2011, but his love for her continues. He cannot be without her, so he brings her picture with him everywhere. He always thinks of her, and her photo is one of his most prized possessions.

“Giuseppe told me that the reason he visits this location is that a long time ago, they spent many good times together at the small beach nearby,” Giorgio says. “They were each other’s first love and they got married. It was truly a lifetime of love.”

Giuseppe and Ida were married in 1969, and he was devoted to her until the day she left this world. And, actually, he’s still devoted to her every day.

“I have also lost my two little brothers and a son of five months, so I knew what he was going through. I think that everyone in this world has at some point, lost someone special to them. So each of us has these moments of grief, it’s just that Giuseppe had the great courage and dignity to show it,” Giorgio said.

Virgos Are Masters Of Balancing Life During Quarantine, Here Are Funny Moments Of Them

How Are The Three Air Signs Similar And Different From Each Other?

14 Secrets Of The Scorpio Personality To Know

Artist’s Parenting Experience Shared Through 20 Comics With Feline Twist, Have A Look!

You Wanna See An Angry Cancer? Try These!

12 Zodiac Signs And The Art Of Flirting

The Jealousy Levels Of 12 Zodiac Signs, Ranked From Lowest To Highest