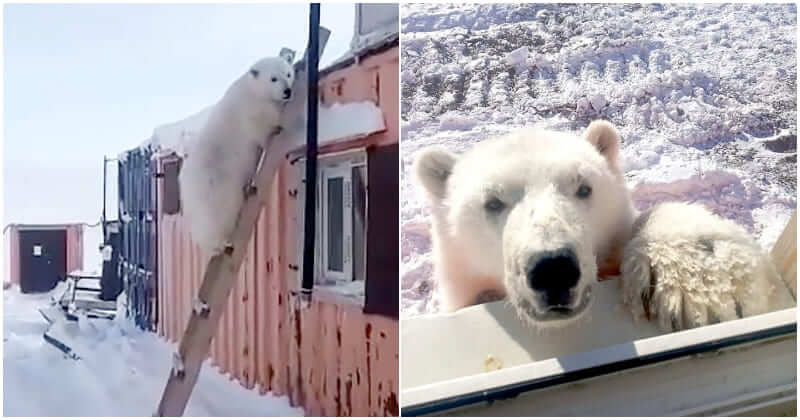 Gold miners on the remote Russian island of Bolshevik were surprised when they spotted an abandoned polar bear cub near their facility. It’s strange to spot a bear cub without its mother, so probably the mother of this cub had gone. The little beast seemed to be hungry and was attracted by the smell of food from the mine. The poor baby came close to the miners and begged to be fed. Although there were strict rules that forbid the feeding of endangered polar bears, the miners decided to feed her, and that saving her was the top priority. During several months, they took care of the bear cub and fed it every day. Unfortunately, she was saved, but she lost the ability to hunt. And the wild animal gradually became tamed like a dog.

Eventually, the miners finished their contract and returned to the mainland. They had no choice but to leave the cub on the island. Before they left, they called for help as the bear couldn’t survive for long without them.

Andrey Gorban, 56, director of Roev Ruchey Zoo in Krasnoyarsk, who was in charge of the rescue said: “The workers could only get in touch with us at the end of their work stint, as they had no communication link at the base.” “We were told that the men were leaving back to the mainland, and the cub had stayed there alone. Our only hope was that they left quite a big open rubbish site, so there was a chance that the cub could feed off it for weeks.”

With help from the Moscow Zoo, a rescue mission was launched. They sent a helicopter to Bolshevik island to pick up the bear and luckily, they found her. The animal was at the site looking for the workers, she was clearly missing her friends. The bear was then transferred back to the Moscow Zoo, where it will undergo quarantine before a decision is made on where to permanently home it. Andrey Gorban praised the miners for their benevolent hearts. He said: “For right or wrong, they fed the endangered animal and through that tamed it. The shift workers saved its life, the cub had no chance to survive.”

Subway Cat Spotted Regularly Taking Subway In Tokyo All By Himself