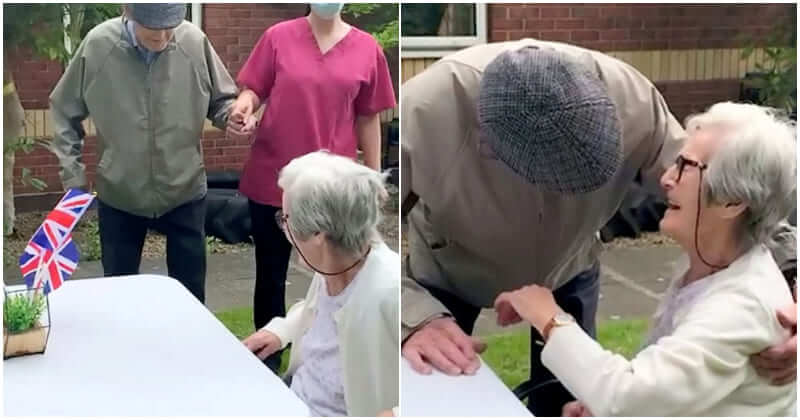 On June 18, 2021, a touching video shared by USA TODAY captured an emotional reunion of two 94-year-old twins after living apart for over 12 months.

Minnie Walsh and Patrick Speed are attached siblings of each other. Early this year, Minnie’s children decided to send her to Saltshouse Haven care home for her treatment. A couple of months later, Patrick was moved into the same care home but a different unit from his twin sister.

Despite staying at the same place, they were not able to visit each other due to social distancing in the pandemic. According to the twins, it was the second time, along with WWII, that they were kept separated from one another. Eventually, on June 11, both were filled with warmth and happiness to meet each other in person. Before the reunion, the twins had received vaccinations.

The video recorded a 94-year-old Speed keeping his cheerful smile while walking towards Walse, who was waiting for him at an outdoor table. The following moment, as you might guess, was very touching and unforgettable to them.

“We never expected anything like this to happen, but you have to accept it. It was so good to see Minnie. It made me so happy. We’re spending every moment together now. I make sure she’s got everything she needs. We can’t be without each other. We’ve always been together.” Speed couldn’t hold back his tears.

The older sister Walsh shared that she always had her brother’s back when they were children. “I used to fight his battles because he was too skinny. I’m a few minutes older than him so I have to take care of him. We’ve always been together. We used to hear the bombs banging. Mom used to put us in the Anderson bomb shelter. We were always together.”

Taking about the time they didn’t meet each other, she felt upset and missed him a lot, but was so happy inside to meet her twin brother again after a year. “It was so lovely. It was pure joy.”

Husband Asks For 50% Profit From Wife’s Flower Business, Gets An Instant “Delusional!” From Her

Giggle With 14 Hilarious Moments When A Leo Gets Drunk

Music And Cancerians Are Inseparable, Showing Through 15 Funny Memes

The Meanings Of Gemini Symbol That People Might Not Know