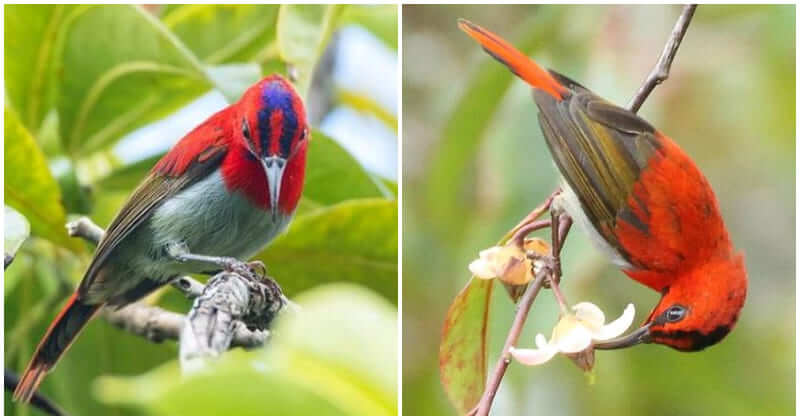 This bird appears conspicuously among the foliage of the forest. Its crimson coat burns like a fire. Its glossy Fu Manchu mustache is distinguishable. Let’s meet Temminck’s Sunbird. Temminck’s Sunbird (Aethopyga temminckii) is a species of sunbird found in Borneo, Sumatra, Malaysia, and southwest Thailand. The male bird can easily be spotted with his blinding crimson breast and upper part. On his head are two lateral stripes joining in a patch on the central nape. He has two other malar stripes run down his throat. These stripes form a perfect Fu Manchu mustache and are colored in dark blueish purple. The male bird has scarlet wings, with olive-edged dark brown flight feathers. His rump is yellow, turning brown downwards with a prominent purple patch on the lower part. His flanks are mostly white, turning pale yellow or olive-green on the belly. The male Temminck’s Sunbird has a long scarlet tail. He has shiny black eyes, a down-curved bill, and blackish-brown legs. The female bird is less colorful compared to the male. She is gray in general, tinged in pale yellow and green. Her vent and under tail-coverts are also yellow; the wings and rectrices are fringed in red. The breeding season of this species stretches from February to August. During this time, Temminck’s Sunbirds build a special egg-shaped nest, hanging down from a twig. They use dry grass and fiber to knit the nest, with an entrance hole and a small porch near the top. Up to three eggs are laid within; they hatch after about 13 to 15 days. The chicks are then fed by both parents in 14 to 19 days until they’re fully fledged. In their natural habitat in Southeast Asia, Temminck’s Sunbirds can be found in broadleaved evergreen forests, sometimes in secondary growth or montane forests. They are most often seen hanging around flowering trees and bushes, especially mistletoe. Their diet includes a wide variety of nectars and also some small types of arthropods. Temminck’s Sunbirds have quite a wide range. Even though they are on a decline in population number, they are evaluated as Least Concern by the IUNC.

WATCH THIS BIRD RIGHT HERE IN THE VIDEO BELOW:

10 Pictures Showing That, No Matter What, Cats Will Always Be Cats