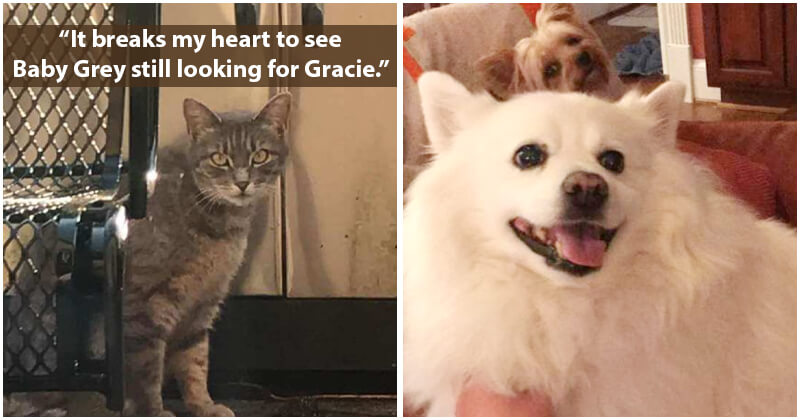 This is a heartbreaking story about a cat named Baby Grey and her dog friend, Gracie. You may think that cats and dogs would not get along, but they prove that dogs and cats can be best friends. In their first meeting more than 2 years ago, the two became fast friends soon after they met. Baby Grey visited Gracie frequently, and the two became even closer to one another. Sadly, Gracie had gone in November 2017, less than a month after being diagnosed with aggressive lymphoma. In Gracie’s last days, Baby Grey came to see her several times and just sat by each other as if they wanted to be with one another. It’s been a year since Gracie’s passing, but Baby Grey still comes every day to see her best friend once again. Grey will wander into the yard, stand at the sliding door and wait for at least 20 minutes, and even longer. She refuses that the little dog is really gone and believes that her friend will come running to meet her at the glass. This story is really an inspiration for us to see such a kind behavior of these two animals. “It breaks my heart to see Baby Grey still looking for Gracie,” Brennaman added, “but at the same time it gives me so much hope that these two animals had such a strong bond.” Please share this touching story with your loved ones!
H/T: The Dodo

10+ Times Cats Said “If It Fits, I Sits” And Proved Themselves Right

This Dancing Cat Does Splendid Ballet Dancing When Alone