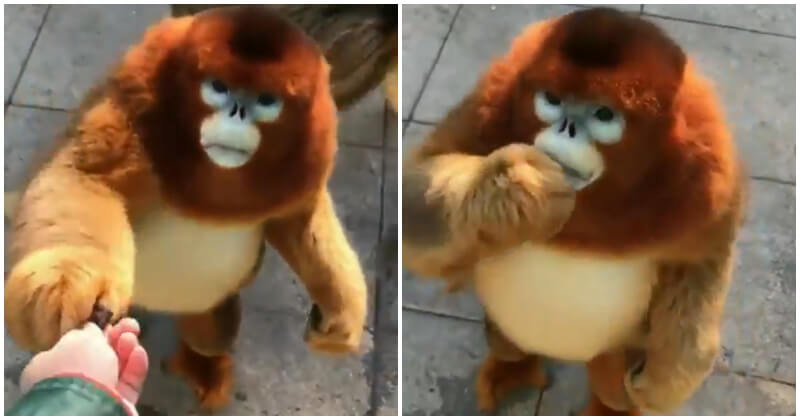 Wild animals need natural habitats to ensure their normal life. They may face threats from their predators, but it’s the rule of nature. If people are all aware of this, their population will be protected. No species become threatened, endangered or extinct.

If you spot an incredibly rare wild animal near your living, try to live lives in harmony with it and protect it where possible. Don’t bother their days with your curiosity! If you respect these creatures, they won’t also disturb you.

And, the locals in the Maoping village in the western part of Hubei province, China, do the same. As you can see in the video, a rare golden snub-nosed monkey is eating berries out of a person’s hand. The scene is so real.

The adorable footage was filmed on camera and uploaded on The Golden Monkey YouTube channel. It attracted millions of views and comments

When the video was shared on Twitter by Cozy Club, it went viral. People can’t believe in their eyes as the villagers live harmoniously with the unique animal in that way. They were also curious about what sort of monkey was.

The golden snub-nosed monkey is an endangered species in its native China. Many people compare it to an Ewok, a fictional species from the Star Wars universe.

There is an interesting thing that Maoping village is home to so many rare animals. If you make a visit to this peaceful and rustic village, you can see giant pandas and the crested ibis.

Just looking at the happy expression of the rare golden snub-nosed monkey when being fed berries! The unique creature enjoys living near the locals who have a high sense of animal protection.

See more photos of these monkeys below!

This Japanese Photographer Specializes In Shooting Ninja Cats, And The Result Is Too Purrfect

Bulldog Loves Sticking His Head Through Holes In Fence, So His Owners Paint Funny Costumes On It