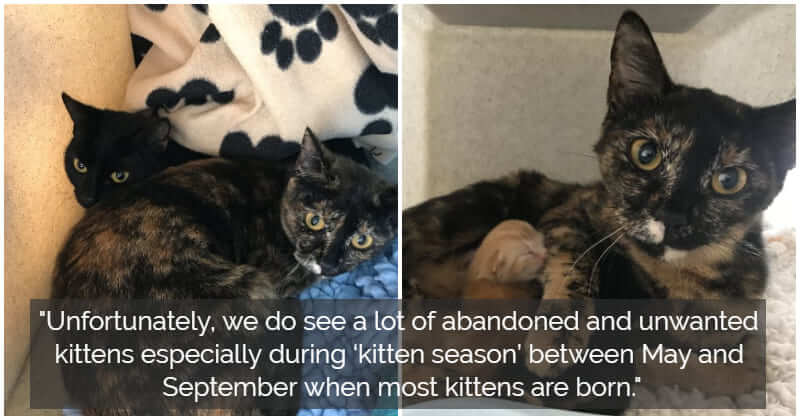 A pregnant cat and two other cats have been found abandoned in a cardboard box in the woodlands in Cuxton. They were found by a woman who was walking her dog in the morning on  11. The cats were in the face of the crisis and had to manage to survive in terrible conditions. They were then taken to a nearby RSPCA center, where they were all checked and cared. “It must have been very frightening for them to have been left this way. We understand that people’s circumstances change, but there’s never an excuse to abandon animals like this,” says Kirsten Ormerod from RSPCA to Bored Panda. “Unfortunately, we do see a lot of abandoned and unwanted kittens especially during ‘kitten season’ between May and September when most kittens are born. Often, these kittens are unplanned and therefore unwanted which has led to a cat overpopulation crisis in the UK. The key to tackling this is to ensure that your cat is neutered from four-months-old,” an inspector of RSPCA said. The good news is that the pregnant cat named Maude was given proper medical care and gave birth to two healthy and cute kittens. The other two cats found together with Maude were nursed back to health, too.

The other two cats who were found together with Maude In a recent Facebook post, RSPCA shared that “This is Maude’s heartbreaking story, and it’s not uncommon. Our animal rescuers are called to appalling abandonments like this all year round, but particularly right now. Maude and her kittens have gone on to live their dream lives and found their forever homes.” We don’t understand people, how some person can abandon such beautiful animals. But thankfully, now they’re all safe. After everything that’s happened, we are happy to know that they have now found loving families! If you want to help poor animals find forever loving homes, you can visit RSPCA’s website to see more. What do you think about this story? Let us know your thoughts in the comments below and don’t forget to share this article with your friends and family members!

“Love Me, Love My Dog”: Woman Asks Reddit If She Should Stop Letting Her Dog Sleep In Her Bed Because Of Her Boyfriend’s Rules

Fat Cat Dad Won’t Spare His Kids Food, So His Owners Came Up With A Brilliant Plan