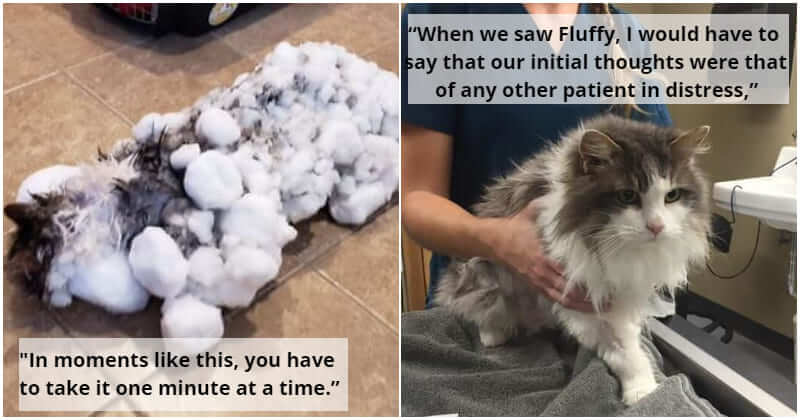 Fluffy, an ‘essentially frozen and unresponsive’ cat found buried in the snow frozen and near death outside her owners’ home in Montana. This is a landlocked state in the Northwestern United States, where was suffering from freezing temperatures of between -1 (30F) and -8 degrees (17F). It’s heartbreaking to think of the poor cat trying to survive in these conditions.

When the homeowner discovered her, they took her to an animal clinic immediately to receive the treatment. At first, staffs thought that she passed away until they looked at her, listened to her and realized that she’s still alive. And of course, the veterinarians refused to give up on her.

“When we saw Fluffy, I would have to say that our initial thoughts were that of any other patient in distress,” Andrea Dutter, the Executive Director of the Animal Clinic of Kalispell told Bored Panda. “All hands on deck and let’s thaw this sweet baby girl out! In moments like this, you have to take it one minute at a time.” After long hours in the emergency room, Fluffy finally began to rise and eventually, the furball fully recovered. In Fluffy’s case, she had a will to survive and she has proven that to the world. Now, Fluffy is back at home with her humans and this time, she will be recovering indoors. Although she was used to the outdoor lifestyle, we are hoping that her miraculous recovery will make her think twice about the benefits of being indoors. “We truly hope that Fluffy’s story can help other pet owners be aware of ways to help their indoor and outdoor pets stay safe and the importance of seeking medical attention right away vs attempting to treat their pets on their own. Our doctors and staff didn’t do anything different than any other veterinarian and team would do. We (and Fluffy!) are grateful for Fluffy’s owners for acting quickly in a scary situation.”

Meet Darius, The Talented Rat Who Was Taught To Paint With His Feet

Husband Lies To His Wife About The Death Of Her Crested Gecko, And Reddit Says It’s Terrible

“We Were All In Tears!” Emotional Moment Dog Is Back In Owner’s Arms After Being Missing For 5 Years

“Dear Future Husband! For Making Attempts To Abuse And Get My Daughter’s Cat Killed, Now You’re Officially Titled my EX!”