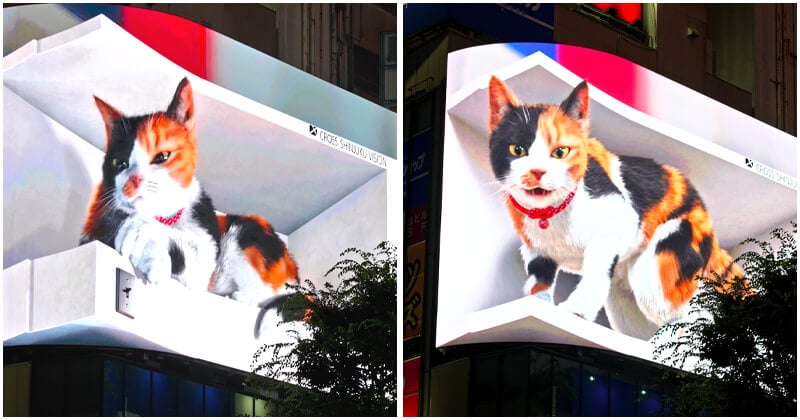 Dubbed as the future of advertising, 3D billboard screens in several Asian countries are recently taking the world by storm and Japan, as usual, never falls behind in the fierce race. This astonishing nation has wowed the whole world again by an impressively realistic gigantic 3D cat put right in the heart of Tokyo and people just can’t get enough of this super sweet feline.

Developed by MicroAd Digital Signage and Yunika Vision, the calico cat is created to cheer residents up during this tough time. It is placed on an 1,664-square-foot LED screen near the east exit of Shinjuku train station, Shinjuku district where about 190,000 locals often pass by each day. Needless to say, this number has been increasing rapidly since the pawsome newbie shows up in the neighborhood.

This mind-blowing advertisement features the newest technology and is aimed at showing our planet one of the many amazing possibilities waiting for us in the near future. The jaw-dropping animated cat officially starts her show (okay, let’s assume it is a “she” because most calico cats are female, you know) on July 12, but she has already appeared a couple of times since last month as a test version.

The awe-inspiring Shinjuku cat appears to be enjoying herself on a white bookshelf and having a great time judging her admirers below. She looks very “Japan” with a traditional red necklace.

Of course, Tokyo citizens aren’t the only ones who are obsessed with this gorgeous kitty. Since she first made her debut on Twitter a few days ago, everybody has been talking nonstop about the gigantic cat.

Ruling the curved LED digital signage from 7 am to 1 am, this charming cutie also has different moods depending on the time of day. She wakes up in the morning, plays around for a while throughout the day and then starts to relax and falls asleep at night.

Let’s take a peek at this incredible girl:

To no one’s surprise, she leaves the internet in awe:

Emotional Story: Kindness of Young Boy To Homeless Man and His Poor Dog

5 Absorbing Examples Of Animals And Their Habitats In Nature