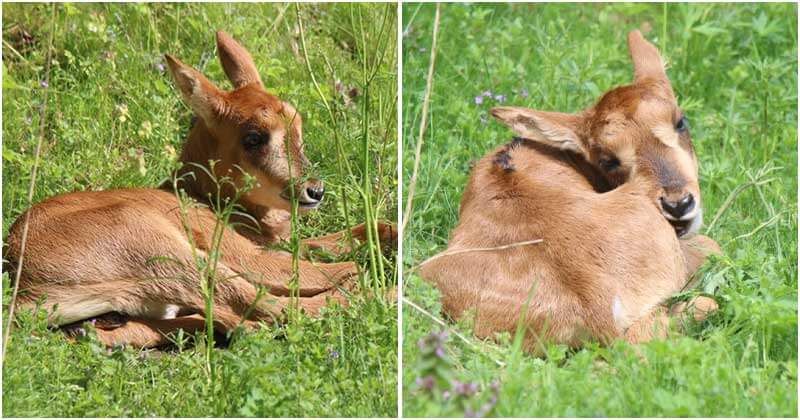 The sable-horned antelope is a critically endangered species. These animals are known for their impressive ringed horns that rise vertically and curve backward. And their horns have been an appealing target of poachers. For this reason, some wild sable-horned antelopes have been kept in wildlife sanctuaries to preserve their population. Zoo Gdańsk, a zoological garden located in Gdańsk, Pomeranian Voivodship, Poland has recently announced the birth of a sable-horned antelope. The arrival of the newborn is worth celebrating!

It’s the result of the zoo’s specialized breeding process. All the efforts of the zoo are worth it. The healthy calf was born to a 6-year-old mother and a 5-year-old father on May 16th, 2021. His mother is brought to the zoo from France while his father came from Czech Republic.

Zoo Gdañsk is a member of the World Association of Zoos and Aquariums. Covering an area of 125 acres of land, this zoo is home to many different animal species. Additionally, it is a famous destination for entertainment. Both kids and adults alike love to visit the zoo. Regarding the baby boy, he is doing really great now. He loves bouncing in his enclosure. As he hides from everyone, the zoo‘s staff could only spot him until 10 to 15 days. But they still keep a close eye on the health of the mother and the calf. Additionally, there is an expert team that comes to examine the pair regularly.

The calf has reddish-brown, with virtually no markings. This coat is very helpful for baby antelopes, enabling them to camouflages from predators in the wild. But when they grow older, their color changes. It turns into a darker brown with striking white markings. Sable lives in herds of 15 to 20 individuals with a matriarchal social structure, which means the female is the leader. There is only one adult male (called a bull) in each herd.

These animals feed mainly on grass but they also eat herbs and leaves from shrubs and trees. If they are threatened by a predator, including lions, they will confront it. The scimitar-shaped horns help them win the fight.

8 Gorgeous Animals Live In Lake That Can Catch Your Eyes

8 Cat Puns That Will Make Your Day

Dog Digs A Big Hole Under A Grave, And The Reason Behind Startles Internet

5 Biggest Cat Species – The Dominating Animals In The Jungle