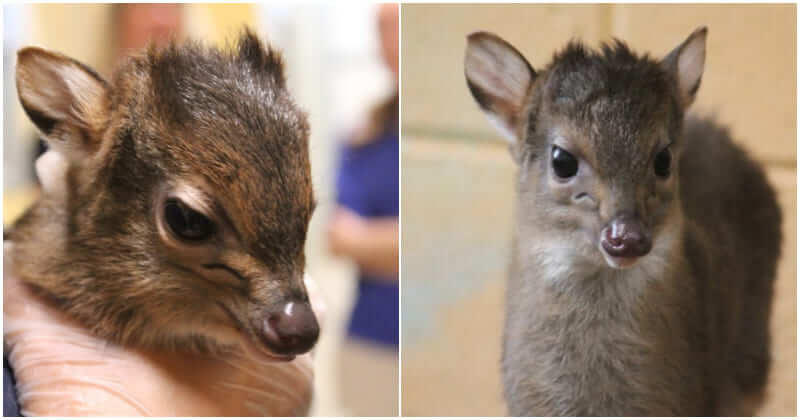 The Chattanooga Zoo at Warner Park is a 13-acre zoological park located in Warner Park in Chattanooga, Tennessee. Opened in 1937, the zoo is the home of about 860 animals representing over 140 species. Later this May, the zoo has rejoiced at the birth of a new blue duiker baby.

In the early morning on May 25th, the female blue duiker, Poppy, gave birth to a baby calf.

After examination, the veterinary team apprised that the baby was a little princess. The calf weighed 495 grams at birth, equivalent to a pack of butter. The team cleaned her up and injected a dose of vitamin E for an extra boost. The baby was healthy and irresistibly cute. Surely, everyone would quickly fall to her charisma.

Come to the Chattanooga Zoo and see this adorable princess for yourself!

The birth news of the baby calf received a lot of attention from animal lovers. A poll was created on the zoo’s Facebook page to determine the name of the new baby. With overwhelming upvotes, the name Smidge has been chosen for our little princess.

Blue duikers are the smallest members of the antelope family and are exceptionally adorable. The name Blue Duiker originated in the Dutch language, which means ‘diver’. Undoubtedly, the name suits them well because they tend to dive into high grass or dense bushes when scared.

Blue duikers are the same size as a small dog, measuring from 4 to 9 kg in weight and from 55 to 90 cm in length. The color of their fur greatly varies by subspecies. It can be grey, brown, blue and even black. Blue duikers feed on fallen fruits, foliage, flowers and pieces of bark. Occasionally, they find and eat fungi, resin and ants, which are licked from the ground.

10+ Photos That Show Cats Are The Best Subjects To Photograph

20+ Funny Cat Memes That Will Give You A Good Laugh