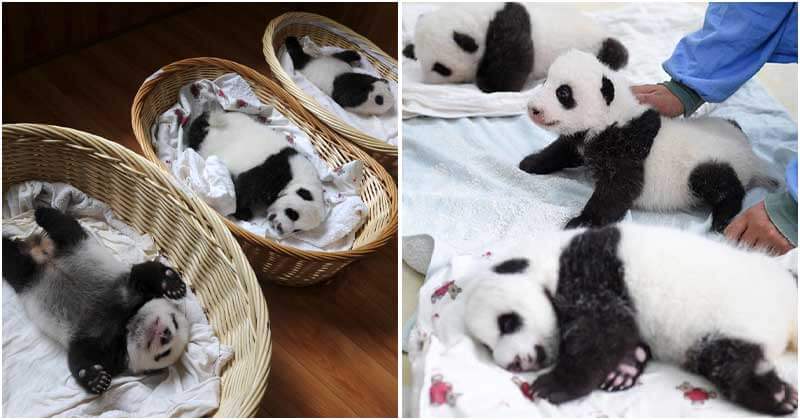 Pandas are among the most adorable animals on the planet. Their iconic patterns on the fur, chubbiness, and clumsiness seem to have charisma. These cute, cuddly bears are additionally innocent and playful. I’ve seen an adorable video of a panda cub keeping rolling and tumbling around when the zookeeper is trying to rake leaves. So lovely creature!

Are you curious about what does a baby panda looks like and how it is cared for? If yes, this article will make it all clear. A giant panda breeding center in Ya’an, Sichuan province, China disclosed adorable photos of 10 newborn pandas. These fragile creatures were on display and won the hearts of millions.

Visitors to the center couldn’t keep their eyes off these cubs. Placed inside baskets during their debut appearance, these cubs were sleeping soundly. Some people said that it was probably the most peaceful scene they had ever seen.

As these were one week to two months old only, the staff at the breeding center had to keep a close eye on them. Luckily, all 10 cubs were doing really great.

Although these pictures were first shared a few years ago, they still gain millions of views these days. Who can resist the cuteness of a baby panda?

Giant pandas or pandas live mainly in temperate forests high in the mountains of southwest China where they feed entirely on bamboo (shoots, leaves, and stems). They eat around 26 to 84 pounds of it every day and grow up to 200 pounds to females and up to 300 pounds to males.

Currently, there are only about 1,500 pandas survive in the wild.

Giant panda breeding centers in China have worked hard to conserve maintain the population of this species. They create proper habitats and give these animals needed care.

As you may know, giant pandas only give birth to one cub every 2 years. That’s why the birth of a giant panda cub is worth celebrating.