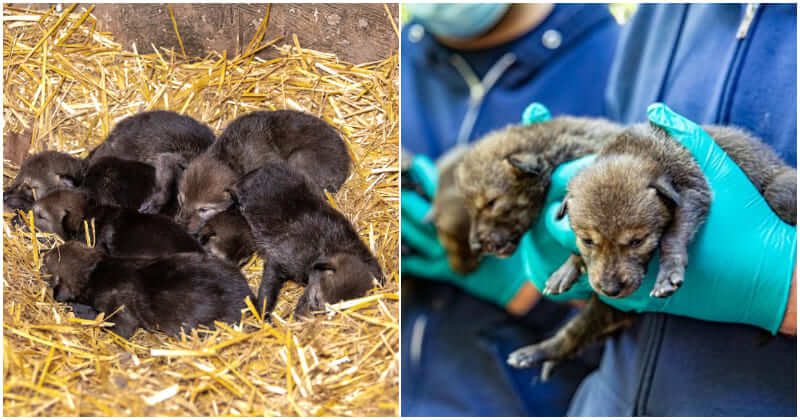 The red wolf is classified as a critically endangered species by the IUCN since 1996. With a continuous population decline, the total number of this species in the wild is now less than 30. Luckily, the red wolf has recently been bred in captivity to be reintroduced into the wild. And the good news has come to the North Carolina Zoo.

On May 17th, the North Carolina Zoo happily announced the news about the birth of 3 litters for a total of 12 red wolf cubs. According to the zoo, those puppies were born over three days at the end of April.

The zoo, with the motto ‘Conservation is at the heart of everything that we do’, has eagerly involved in the conservation of animals for more than 20 years. And this time, the birth of a dozen red wolf cubs is truly wonderful news to the zoo.

“These births are important because many of our wolves, once matured, have been moved to other breeding packs to continue to help bring this species back from near extinction,” said Secretary Reid Wilson.

The wolf pups and their mothers are all healthy and doing well. Caretakers will closely monitor them to ensure they’re always in good condition. People can even adopt one of these pups in support of the zoo.

Let’s hurry up to see these cute babies at the North Carolina Zoo!

Mother Nature Is Amazing: You Never Know These 10 Extraordinary Pigeons Exist On Earth!