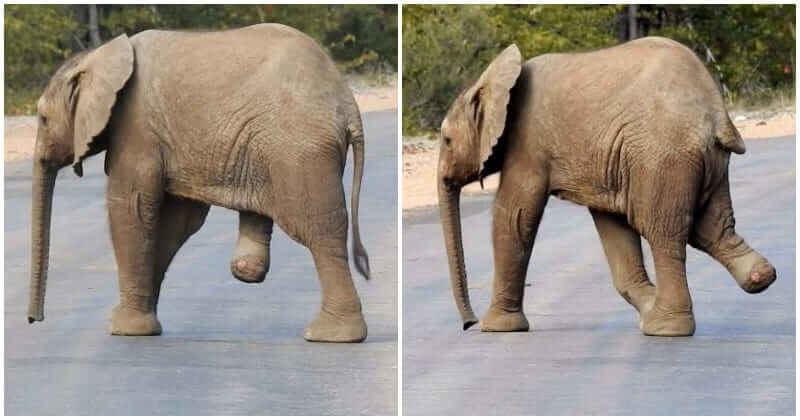 Kruger National Park, northeastern South Africa, is one of Africa’s largest game reserves. Its high density of wild animals includes the Big 5: lions, leopards, rhinos, elephants and buffalos. Unfortunately, poaching has currently been an alarming problem here when the number of animals that fell victims to poachers continued to rise.

Poaching is a ruthless and condemnable crime. The animals that were subjected to these criminals will usually be found deceased, or alive but in critical conditions. The video below will provide a closer look.

When Patrick Ellis took his wife, Topaz and his son, Daniel on a safari in Kruger National Park, they accidentally came across this little poor guy. The footage shows a brave young calf with three legs and a stump, limping across the road with its herd behind.

It’s thought that the elephant got caught in a flare trap and lost a part of its right hind leg. Thankfully, the wound seemed almost healed and the elephant looked strong and healthy. However, that leads to an assumption that it probably got this wound several months earlier and went unnoticed by rangers.

The poachers in Kruger National Park became more and more organized over time, and they even had access to highly sophisticated technology. Therefore, a new unit, National Wildlife Crime Reaction Unit (NWCRU), was established in the hope of more effective and timely prevention towards these criminals.