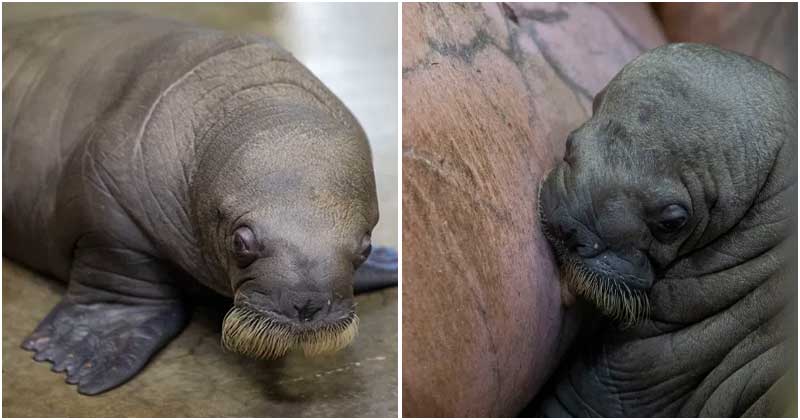 Walrus is classed as vulnerable on the Red List of the International Union for Conversation of Nature (IUCN). For this reason, some of the wild walrus have been raised in zoos which provide them with proper habitat and needed health care. Simultaneously, some zoos have cooperated with sanctuaries to organize breeding programs. This will help increase the population of this species.

The Pairi Daiza zoo is an active participant in the programs. And recently, they have got very good news. A bouncing baby boy walrus was born to mom Tania and father Odin. They announced the birth on their Facebook Page. It is worth celebrating!

The tremendous efforts of the zoo‘s managers and staff have been paid. More importantly, the arrival of baby walrus inspires them to work harder. He has his role in the program.

The calf weighs around good sixty pounds and is doing really great – eat well and swim well. The newborn and its mom are now off the display and placed in a room together. This enables the duo to bond and the mother can nurse. The staff continues to keep a close eye on the mother and the baby until they are ready to be on display.

The 17-year-old mother walrus, Tania, is from L’Oceanogràfic, an aquarium, in Valencia, Spain. She was transferred to Hagenbeck animal park in Germany in order to mate with the only breeding male in Europe.

Although Tania is a first-time mother, she is doing her role well. The staff hasn’t found any “abnormal” behaviors of the new mom so far.

The arrival of the calf also shows that the Pairi Daiza zoo made the right decision. If they didn’t bring Tania here, they could never celebrate the birth of the bouncy baby boy walrus.

If you love this article, just share it with your family and friends!

20+ Dogs Who Are The Perfect Therapy For Tiredness And Stress

If Cats Had Fingers And Could Text, What Would They Send To You?

Intending To Adopt Siamese Cat, Man Ended Up Being Chosen By A Blind Kitten