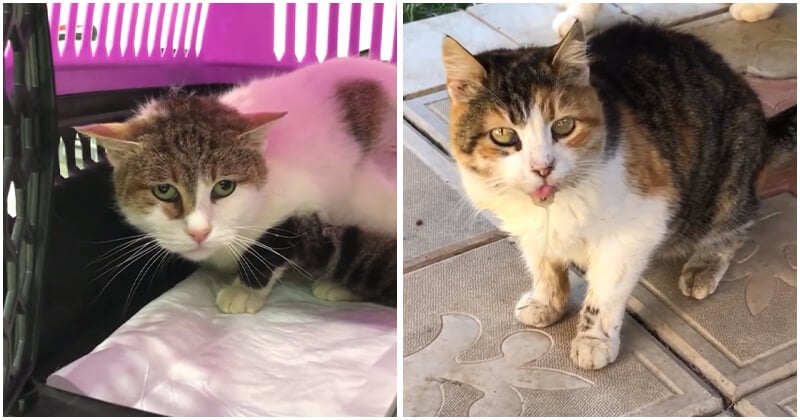 It’s no secret that this world is full of cruel people who treat innocent, voiceless creatures brutally. But thankfully, we still have a lot of kind-hearted human beings who are never hesitated to take care of any animal in need that they just came across. This amazing man is one of them. He already has a dog and 16 cats in his home, but he doesn’t mind watching over poor strays he sometimes meets on the streets either.

During the first half of this year, the guy stumbled upon more sick cats than ever around his neighborhood, and there was even a time that he had 4 stray cats staying at different clinics simultaneously.

Yoda and Niagara are two of the stray cats that he has helped lately. Between these two, Yoda was the first one he met, right in his garden. The smart kitty was wandering outside and never let him approach her before, but when she suffered a serious health problem, she came to that land and occupied one of his cats’ houses.

When the night fell, as he accidentally heard her horrible sound (which he described as “the sound of a horn”), the kind man immediately rushed her to the vet. It turned out Yoda had a severe lung infection that needed to be treated right away, so he let her stay there for the next 3 weeks.

Of course, the cat was also treated for parasites and spayed during her short stay at the clinic. She put on some weight, too. Yoga was told to be really aggressive while stay there, but when the man came to pick her, she sweetly let him pet her.

Niagara was another sick cat that was helped by this caring man. The charming calico couldn’t stop drooling because of the lesions and inflammation in her mouth, and he had to lure her from a dumpster on the street to his garden to trap her and bring her to the vet.

Niagara was even way more aggressive than Yoda so treating her wasn’t easy at all.

Just like Yoda, Niagara fully recovered after 3 weeks and both of them were released back outside where they would be much happier to live. But after their treatments, the two cute girls don’t forget to come back to his garden once in a while to visit him and hang out with his outdoor cats either.

Please share Yoda and Niagara’s uplifting story with your loved ones!