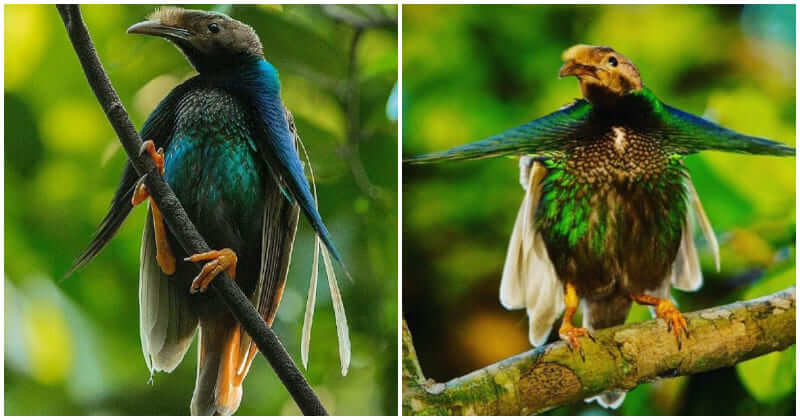 Hidden amongst the canopy of the forest, was first introduced to Europe as a gift for the King of Spain, remaining a mystery to all scientists for almost a century, is a special bird species.

A shiny crown of violet-and-lilac color, with a shimmering suit in a glowing emerald-green shade, his appearance is solely an embodiment of classic luxury.

Also known as Wallace’s standardwing or the standardwing, it is a species of bird-of-paradise. It’s also the only member of the monotypic genus Semioptera.

The standardwing is a medium-sized bird species with an estimated length of about 28 cm. The male bird stands out unmistakably with his coat in iridescent bright emerald-green color while the female is unadorned with olive-brown cover

Moreover, the male bird’s most stunning features are two pairs of long silky white plumes. These plumes stick out from the bend of its wings and the bird can manipulate them at will.

The standardwing birds of paradise have their back, wings and tail colored in olive-brown. The females have a longer tail and both sexes have bright orange legs, which perfectly noticeable on the dark background.

Was first officially discovered in 1858, the standardwing has disappeared for nearly 60 years and could only be spotted several times until 1953. It was not until 1983 when the British ornithologist David Bishop rediscovered the species that detailed observations of this birds behaviors were recorded.

Standard wing birds of paradise feed on a variety of fruits, insects and arthropods. They inhabit the tropical region and prefer lowland tropical rainforests and hills, and occasionally appear in scattered woodland.

There is very limited information about this bird. Observations provide that the standard wings have a polygamous mating system. In the breeding season, male birds gather up together and perform a spectacular display in mid-air.

Their performance includes “parachuting” with wings and spreading its vivid green shield on the breast. They also use two special pairs of white plumes to flutter above their back and perform some dance moments. According to Sir David Frederick Attenborough’s speculation, this extravagant mass display is maybe to serve to establish the hierarchy for breeding rights, rather than directly impress the females.

The standardwings are endemic to Northern Maluku in eastern Indonesia. Although their habitat range is quite narrow and limited, they are a common bird species on their home islands. Therefore, the standardwing bird-of-paradise is evaluated as Least Concern by IUCN.

WATCH AND LISTEN THIS BIRD RIGHT HERE BELOW: