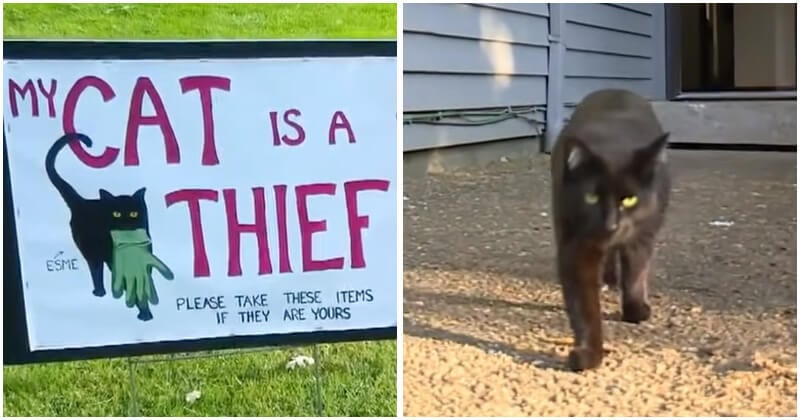 Cats have their own special ways to express their affection and gratitude toward their humans. If you happen to own one cat or a few cats, don’t be surprised when they bring home rats, cockroaches or other pieces of stuff home as a gift for you because that’s just how their love works.

Esme, a mischievous black kitty in Beaverton, Oregon has gone viral lately after her sneaky acts were announced to the whole world by her very own mother Kate Felmet. The clever girl had been collecting masks, gloves and literally anything that could fit in her mouth from her neighbors’ garages and a park nearby for a while (well, the term “cat burglar” doesn’t exist for no reason after all!) and if truth be told, she was clearly proud of herself.

“When she brings them, she comes to the backdoor and yowls, like ‘Wooooar!’ till I come and tell her she’s done a good job,” Kate said.

After Esme brought home too many ridiculous items, Kate had no choice but to inform her neighbors about the cat’s theft and hang up Emse’s booties in her garden so people could come and claim their belongings. She didn’t forget to put up a sign explaining the whole story either.

According to Kate, the lawbreaker wasn’t very happy about her human’s decision.

“As soon as I put the sign up, she went for a week of not bringing me anything. I had the impression she was a little mad about it,” she continued.

To no one’s surprise, not many people were irritated by that hilarious cat. Some even found her very cute instead.

“People come by and mostly take pictures, but we had the school bus drive by and take a few pairs of gloves,” Kate said. “I’ve been thinking about making another sign that says take a pair of gloves if you want ’em.”

Let’s take a peek at the funny gal:

Isn’t this cat lovely? Please share Esme’s story with your friends and family!

Adorable Munchkin Cat Enjoys Himself In His Owner’s Classroom