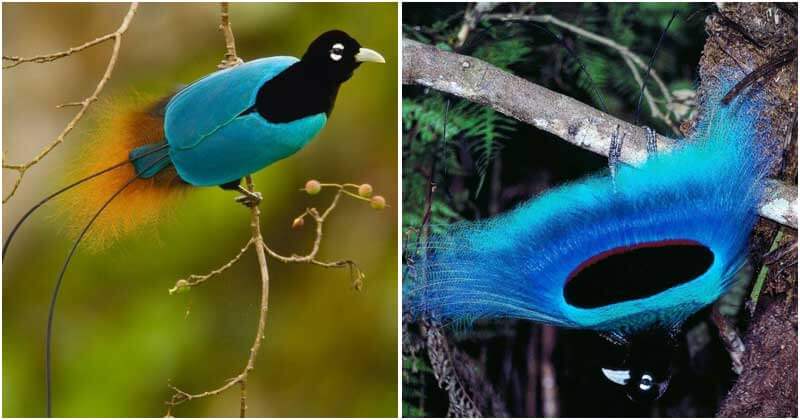 Have you ever spotted a bird on the Internet that makes you doubt its existence? This bird is so spectacular that you think it can only jump out from fairy books or appears at Disney movies. But some facts can get you astonished. Captivating flying creatures like these do live in nature. And you haven’t got an opportunity to see them yet. If you have, make sure that you take it.

The blue bird-of-paradise is one of these breathtaking birds. It has conspicuous plumage and features. Just look! This bird is mostly black, especially its head, neck, and nape. However, the wings are an iridescent blue, creating a stunning contrast for its suit. It also has violet-blue and cinnamon-shaded flank plumes, two long ribbon-like feathers on the short blue tail.

Additionally, this colorful bird is known for its bluish-white bill and broken white eye-rings. Enough for it to stand out from the crowd, right?

Let’s watch this bird in the video below!

Comparing to the male, the female of this species is duller with chestnut brown plumage.

The blue bird-of-paradise is a relatively large species of bird-of-paradise. It can be found, on a small scale, in the mountain forests of the Central Ranges in southeastern Papua New Guinea.

Currently, this beautiful bird is listed as Vulnerable on the IUCN Red List. Its population has decreased over the past few years due to habitat loss and hunting.

Regarding the diets, these birds feed on a wide variety of fruit and berries as they are frugivorous. However, they sometimes eat animal prey such as insects and reptiles if these are available nearby.

When the breeding season begins, the male of this gorgeous species performs charming dancing moves to attract the female. What does he do? He hangs himself upside down from a branch, pulsating the black oval with a rid margin on his chest. Next, he fans out his violet-blue plumes, continuously making a soft, insect-like buzzing noise.

After finding mates, the female starts building her cup-shaped nest for breeding. This nest is made from stems, twigs, palm leaves, and vines. She then lays eggs in her nest and incubates them on her own. She continues to feed the hatchlings until fully-fledged.

If you love this stunning flying creature, just share the article with your family and friends.

“My Boyfriend Banned My Dog From His Home. Is It A Deal-Breaker?”