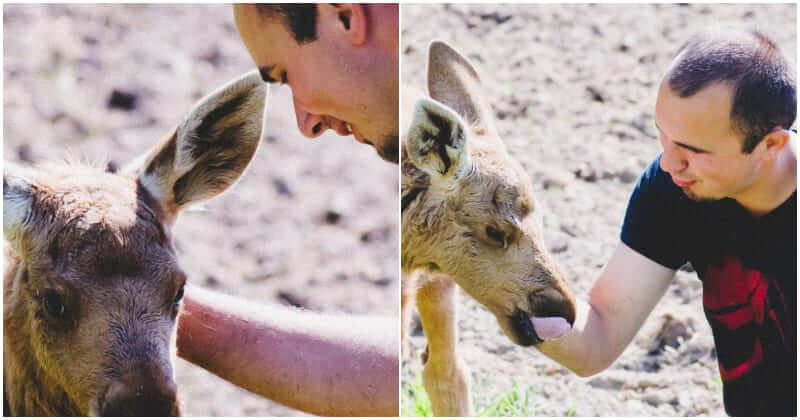 Erikas Plucas, a man from Lithuania, has overcome so many obstacles, dealt with so many hunters in a sole effort to save and protect the life of a baby moose.

He found the baby moose lying right in front of his door. The poor little animal was just a newborn, couldn’t be more than two weeks old. She was there all alone in the dirt, starved and weak. Plucas was heartbroken the moment he spotted the baby moose, she was terrified looking at him but couldn’t run away.

He reached out for help from animal services, then carried her in to see what he could do for her. The animal was so skinny and sick, its fur was severely infested by flies. He called his friends to ask for advice but received only preventative words, that he should not interfere.

Did not give up, Plucas decided that he had to do something to save the moose. He collected any types of leaves he could find and got her some milk, then desperately tried to get her to eat. He knew that if she didn’t eat anything, it would hardly be possible for her to make it to tomorrow.

The animal services officers arrived the next day but there was not so much help. Sadly, there was no specialized institution to take care of these orphaned wild animals in Lithuania. Plucas also realised that he couldn’t find help from local hunters, that was too risky. Therefore, he insisted on keeping the animal and they agreed.

The baby moose was then named Emma. Although he could keep her by his side quite smoothly, taking care of her was a completely different story. He struggled for the first few weeks taking care of Emma. For a man who’s never been a dad, Plucas then became her mother.

He needed to feed her every four hours and he just couldn’t leave her alone, or else she would cry. So the man often stayed with his baby even in sleep, sometimes outside, sometimes in his barn. He gave her his love and care, and in return, he gained her trust.

“She was afraid of everything but me.”

As the time passed, Emma recovered and grew bigger. Her dad knew that someday she would have to go back to the forest. So Plucas usually took her for a walk there, helping her to gradually get used to her wild home. Although it took several times for Emma to overcome her fear of the wild, she eventually managed to go to the forest all on her own.

“I remember those first nights that she didn’t come home,” Plucas said. “Oh, I barely slept. But she grew up, I had to get over it. After all, it was my goal from the very beginning.”

Now that Emma has fully grown up, she keeps coming back to see her dad every day like a routine and spends time playing around with him. She is gentle and loving, careful in any action to not hurt her dad. Plucas is her only exception, aside from him, she is cautious with everyone else.

Plucas is still worried about Emma, even for now. To forestall the tragedy of her mother from happening again to her, Plucas spoke to any local hunter he came across to beg them not to hurt Emma. What a great father he is.

“I had some hunters over for them to see her as not just a nice, warm steak with potatoes and vegetables on the table, but as a very intelligent and loving animal,” Plucas said. “Some claimed they will put down hunting rifles for good, and some promised never to shoot a moose again.”

After moving back into the wild, it didn’t take long for Emma to start her own family. On a visit to Plucas, he noticed that her belly was round and much bigger than usual, she was definitely pregnant. That’s the true happy ending for Emma and her dad.

Watch the video of Emma and her dad below to see their incredible bond:

Broken Kitten Shaking In Fear, Abused By Owners Who Swung Her By The Tail, Becomes A Living ‘Miracle’