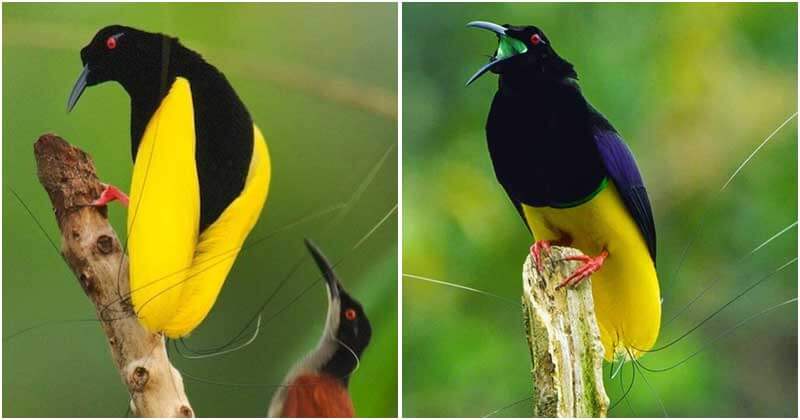 Most of the birds make a name for themselves with their plumage. It’s unique and has the charisma to make us, humans, keep our eyes on them. This coat is splashed with different hues or dyed in a single color. But it becomes the distinctive feature of these creatures, making them conspicuous in nature.

The twelve-wired bird-of-paradise is one of these spectacular birds. The male has an eye-searing suit – velvety black chest and head, bright yellow belly and flanks, iridescent purple wing tops, and a coppery olive-green band around the belly.

Additionally, this stunning creature is known for its ire-like filaments. Just look! They bend back near their base then sweep forward! You can never find this “tail” in other birds.

Let’s discover this bird in the video below!

Comparing with the male, the female of this species is much duller. She is mostly covered in brown with black barring on the underparts. Both sexes have pink feet with large claws.

The twelve-wired bird-of-paradise is the sole member of the monotypic Seleucidis genus. They are endemic to the lowland rainforests of Papua New Guinea and its neighboring Island Salawait, Indonesia.

These medium-sized birds prefer living in the lowland forests and swampy areas of the islands. The male is highly territorial. His area is never less than 700 meters away from other males in their colony.

Regarding the diets, these birds feed mainly on fruit and arthropods. However, they sometimes eat frogs and nectar if these are available nearby.

When the breeding season begins, the male twelve-wired bird-of-paradise displays a dance with his wires to attract the female. There is little information on the rest of their breeding process.