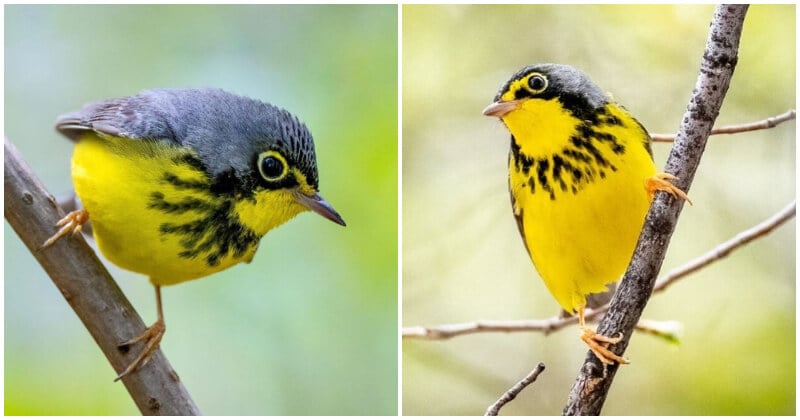 There are many stunning warblers in nature. These tiny fluffy creatures are gifted striking coats, making them conspicuous in their colony. Multiple hues splash on their plumage but they blend harmoniously and beautifully. Sometimes, even two colors can make an artwork.

The Canada warbler is among these spectacular birds. It wears a one-of-its-kind vest of silver grey. Meanwhile, the breast, throat, and belly are covered in vivid yellow. Such a beautiful contrast!

You can watch the video of these warblers below!

The female and the male of this species look similar. However, the male has a darker necklace and longer tail than the female. Young birds have faint grey necklaces.

The Canada warbler is a small boreal songbird of the New World warbler Parulidae family. As migrants, these birds choose to live in Canada and the northeastern United States during the summer and fly to northern South America when the winter comes.

These birds prefer living in thickets where they dine mainly on insects sought from vegetation or on the ground.

When the breeding season begins, approximately 2/3 population of this warbler inhabits in boreal forests. The female builds her nest out of root masses, hummocks, stumps, banks, mossy logs, and sometimes leaf litter. This nest is laid very close to dense ground cover. She then lays 5 eggs in her nest and incubates them for 12 days. The female continues to feed her hatchlings until fully-fledged, around 10 days. Noticeably, the male joins his mate in this process.

18 Baby Animals Who Are Simply Too Cute For This World

10+ Photos Of Pets Posing In The Most Hilarious Ways

Cheerful Baby Elephant Keeps Rolling A Tourist Around To Give A Big Hug, Making Her Giggle So Hard

This Butterfly-topped Caiman Looks Fabulous Like A Fairytale Character